It appears as though Kyle Trask will be the man who'll someday succeed Tom Brady at quarterback for the Tampa Bay Buccaneers. 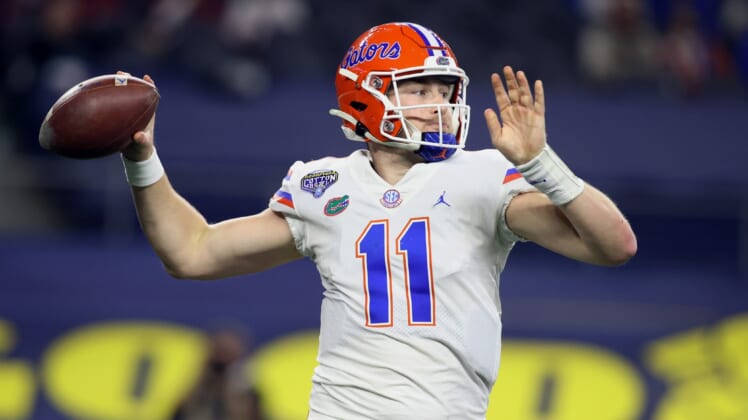 Florida Gators quarterback Kyle Trask led the nation with 43 touchdown passes last season, and he’ll stay in the Sunshine State in the NFL. The Tampa Bay Buccaneers drafted Trask 64th overall to end the second round of the 2021 NFL Draft on Friday.

Trask had a major breakout 2020 campaign, throwing for 4,283 yards and putting himself in the conversation to be a first-round pick. Unfortunately for him, many key Gators players sat out the Cotton Bowl against Oklahoma, and Trask threw three picks in a 55-20 loss.

Between that dud of a performance and the fact that two of Florida’s pass-catchers in Kyle Pitts (No. 4 to the Atlanta Falcons) and Kadarius Toney (20th to the New York Giants) were chosen on Day 1 of the 2021 NFL Draft, there are plenty of reasons for detractors to doubt Trask’s ability to play at the NFL level.

Having said that, Trask is a worthy Day 2 pick. He rated No. 100 on Sportsnaut’s big board, and was admittedly held in higher esteem before the aforementioned underwhelming conclusion to his college career. That bad finale may have counted too much against him.

With a 6-foot-5, 236-pound frame, there’s no question Trask has NFL size. He can also deliver the ball with accuracy to all areas of the field. It just seems like sometimes he either puts too much touch on the ball, or he doesn’t have that wow-level, special arm talent to get it done. He’s also not a great athlete who can extend plays and make off-platform throws with ease.

As is the case with many QBs, though, so much of their development depends on which team they land with. In this scenario with the Buccaneers, Trask gets to learn from the GOAT himself Tom Brady and will have at least a year or possibly two before he takes the reins of Tampa Bay’s high-octane vertical passing game.