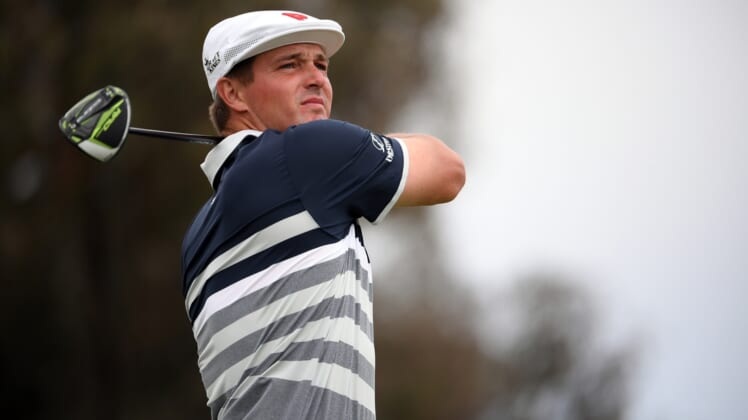 Bryson DeChambeau isn’t satisfied with leading the PGA Tour in driving distance this season as his quest for more distance off the tee continues.

DeChambeau saw his victory at last year’s Rocket Mortgage Classic as validation that his smash-and-wedge approach was working.

He returned from the tour’s coronavirus hiatus to post three consecutive top-10 results. DeChambeau then bludgeoned his way to victory at the Detroit Golf Club, hammering balls as far as he could off the tee and content to hit wedges from wherever they landed.

He was one of three players to post four rounds in the 60s, with his closing 65 helping DeChambeau overtake Matthew Wolff on Sunday for a three-shot victory.

“It was a milestone to show everybody that this is a different way that I can do it and still win, so I was pretty proud of that,” he said Wednesday.

DeChambeau employed the strategy two months later when he again leapfrogged Wolff on Sunday to claim his first major title at the U.S. Open at Winged Foot. He won again at Bay Hill in March and finished third at The Players.

“It gave me the confidence to win the U.S. Open knowing that I can play a game that’s not normal or is a little unique and different,” he said. “You look at the U.S. Open, it was a prime example. Everybody thought I was crazy by saying I’m just going to bomb and gouge it, but it worked out that week.”

The strategy finally backfired when DeChambeau collapsed on the back nine while leading the U.S. Open at Torrey Pines two weeks ago. He chalked it up to bad luck, acknowledging that his aggressive approach off the tee leaves him vulnerable to the occasional bad lie.

And so does the quest for more distance. Asked what’s next in the evolution of his game, DeChambeau said, “Just trying to hit it farther.”

DeChambeau is one of the biggest pre-tournament favorites of the year at +775 by DraftKings to successfully defend at the Rocket Mortgage Classic. The next-closest competitor is Patrick Reed at +1200.

“There’s still a massive advantage to be had if you can do it right, build the right equipment, but then combining that with controlling the wedges,” DeChambeau said. “I think that’s something that’s very difficult to do that not many people can do.

DeChambeau is also planning to represent the United States in the Tokyo Olympics despite Japan’s struggles with COVID-19 outbreaks and what will be a much different experience due to safety protocols and logistical challenges.

Second-ranked Dustin Johnson is among several notable golfer who have opted out of this year’s Olympics, but DeChambeau remains committed to participating.

“Any time you get to represent your country, you can’t miss that opportunity, at least for me,” he said. “I want to experience it once in a lifetime even if it is going to be weird.”