Bryce Harper, back from IL, drives in 2 as Phils top Pirates 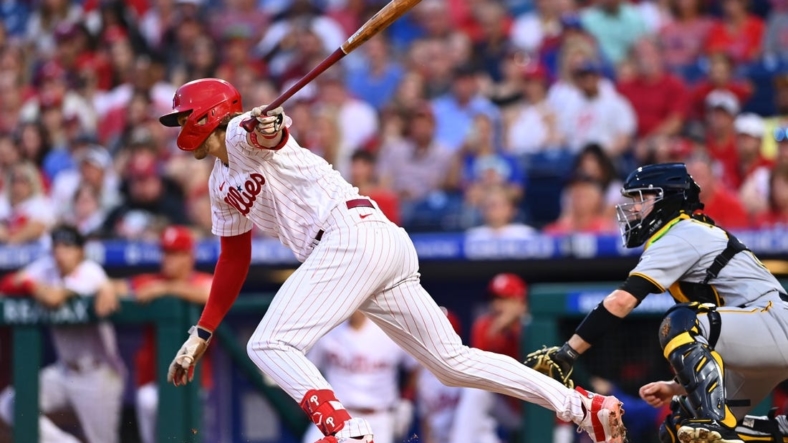 Bryce Harper hit a two-run single in his first game since June 25 and helped lead the host Philadelphia Phillies past the slumping Pittsburgh Pirates 7-4 on Friday.

Harper, the reigning National League Most Valuable Player, had been sidelined due to a broken left thumb. He finished 1-for-4 as the Phillies’ designated hitter.

Rhys Hoskins and Nick Castellanos each added two hits and an RBI and Alec Bohm had two hits for the Phillies, who led 6-0 after two innings en route to their fifth consecutive win.

Philadelphia’s Bailey Falter received the start when Zack Wheeler landed on the injured list due to right forearm tendinitis. Falter (2-3) tossed six innings and gave up five hits and three runs with six strikeouts and no walks.

Brad Hand pitched a scoreless ninth for his fifth save in seven chances.

Bryan Reynolds paced Pittsburgh with a home run and two RBI, and Rodolfo Castro added a homer and single. Ben Gamel also homered while Kevin Newman had two hits for the Pirates, who have dropped six straight.

Pirates starter Bryse Wilson lasted only one inning after throwing 43 pitches. Wilson (2-8) gave up five hits and four runs, three earned, with one strikeout and no walks.

Harper immediately sparked the Phillies with a two-run single to right field in the first inning. Later in the frame, J.T. Realmuto had an RBI groundout and Castellanos hit an RBI single for a 4-0 lead.

In the second, Hoskins contributed an RBI single to center and Realmuto reached on an error by Newman that scored Hoskins for a six-run advantage.

Reynolds launched a two-run homer to left in the fourth to close the Pirates within 6-2. Reynolds had been in a 1-for-21 slump before the long ball.

The Pirates cut the deficit to 6-3 when Castro lofted a solo homer to left in the fifth.

Connor Brogdon replaced Falter to open the seventh and gave up a leadoff homer to Gamel as the Pirates closed within 6-4.

Bryson Stott extended his hitting streak to eight straight with an RBI single to left in the eighth for a 7-4 advantage.