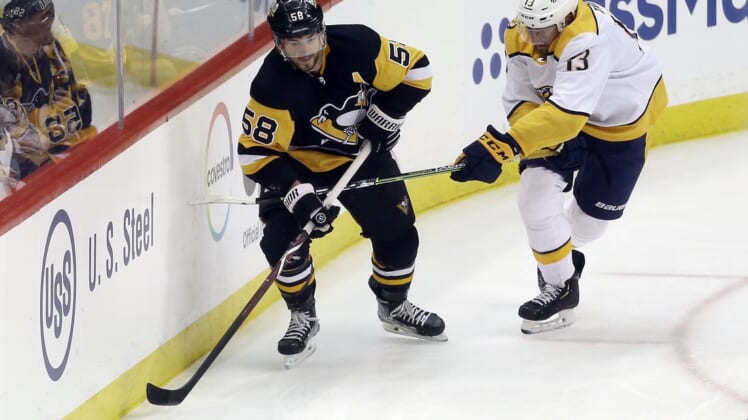 The Boston Bruins want what the Pittsburgh Penguins just got.

The Penguins (43-22-11, 97 points) clinched a playoff spot Thursday, and Saturday afternoon the Bruins (45-24-5, 95 points) can join them if they can just break a concerning three-game losing streak when they host Pittsburgh.

Boston needs just one more point to clinch a wild-card spot, missing a chance Thursday in losing 3-2 to Ottawa, a non-playoff team. Third place in the Atlantic Division remains within reach for the Bruins, but not if the losses keep piling up.

The Bruins’ three consecutive losses — their longest losing streak of the season — comes at a crucial time.

The Penguins had been scuffling, too, lately, but beat the New York Islanders 6-3 to advance to the postseason for the 16th straight year. That’s not only the longest active streak in the NHL, but the longest in all major North American pro sports leagues, including the NFL (Kansas City, seven years), MLB (Los Angeles Dodgers, nine years) and NBA (Boston Celtics, eight years).

The Penguins have appreciation for that.

“The fact that this organization has been able to sustain the level of excellence that it has, year in and year out, for as long as it has, in my mind, is a remarkable accomplishment,” Pittsburgh coach Mike Sullivan said.

The Penguins have won three Stanley Cups during their run.

The flip side is that the current edition of Penguins, despite a solidly played win Thursday, are 4-6-2 in their past 12 games, with six games left in the regular season. Sliding back from third place in the Metropolitan Division into a wild-card spot remains a possibility.

Considering that the Penguins have bowed out against their first opponent in each of the past three playoffs, and work remains to be done in preparing a deeper run.

“We want to get as far as possible, win another Stanley Cup,” said Pittsburgh defenseman Kris Letang, who scored Thursday and is one of three key core players who have been around for all three Cups (2009, 2016, 2017).

Another is team captain Sidney Crosby, who hit 80 points Thursday.

The third is center Evgeni Malkin, who will miss Saturday’s game as he serves the third game of a four-game suspension for a cross-checking incident.

The Penguins offense has come alive, with 13 goals in the past three games, while Boston has just 11 goals over its past five and is 0 for 23 on the power play over six games.

“I think maybe guys are just thinking a little too much,” Bruins defenseman Matt Grzelcyk said. “It’s something we’ve addressed in video (sessions) quite a lot in these last few days, last few weeks.”

Boston coach Bruce Cassidy hopes things aren’t piling up too much for his team.

“Frustration is a useless emotion,” Cassidy said. “I’m not frustrated. We want to correct things. … Some guys that are typically used to putting up goals and points, when it doesn’t go in, they get frustrated.”

Already without David Pastrnak, Hampus Lindholm and Brandon Carlo, Boston lost goaltender Linus Ullmark on Thursday in the first period after he took a shot to the helmet. His status is unclear.