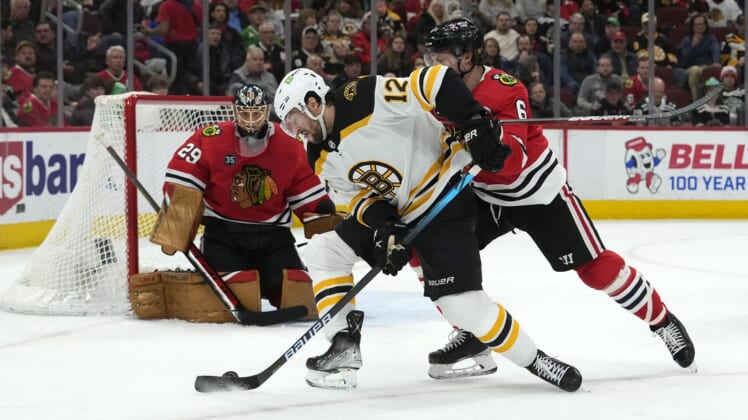 Matt Grzelcyk scored the game-winning goal at 1:40 of overtime to lift the Boston Bruins to a 2-1 win over the host Chicago Blackhawks on Tuesday night.

After David Pastrnak drew two defenders to him, Taylor Hall and Grzelcyk started a 2-on-1 to net the winner. Grzelcyk’s goal from the right circle was his first since Jan. 10 at Washington.

Patrice Bergeron scored the opening goal for Boston, which had a 48-20 advantage in shots on goal. The edge was 35-11 after two scoreless periods.

Hall finished the night with two assists and Linus Ullmark made 19 saves for the Bruins in their third straight win and 10th in 12 games.

Marc-Andre Fleury stole a point for Chicago by making 46 saves, one shy of his career high. The Blackhawks had won two of their previous three games.

On its 40th shot, Boston finally lit the lamp 4:43 into the third period. Bergeron batted the puck out of mid-air after Hall and Brad Marchand had initial chances in a scramble in front of Fleury’s net.

The Bruins’ power play, which had scored five goals in the previous seven games, got three opportunities over the first two periods.

One of Fleury’s best saves came with 2:05 left in the second as he went post-to-post to deny Marchand’s one-time shot on the power play.

Boston appeared to have taken a 2-1 lead with 4:47 left in regulation on a Charlie Coyle rebound, but the goal was immediately waved off due to goaltender interference. The no-goal call was confirmed following a coach’s challenge.

Hall was cut in the face by Chicago defenseman Riley Stillman’s skate on the sequence that led to Bergeron’s opening goal, but he did not miss any time.

Bruins forward Nick Foligno played in his 1,000th NHL game. He and his father, Mike (1,018 games), join Bobby and Brett Hull as the only father-son combinations to reach that milestone in league history.

The game was the second and final meeting between the teams this season, both coming in a span of six days.