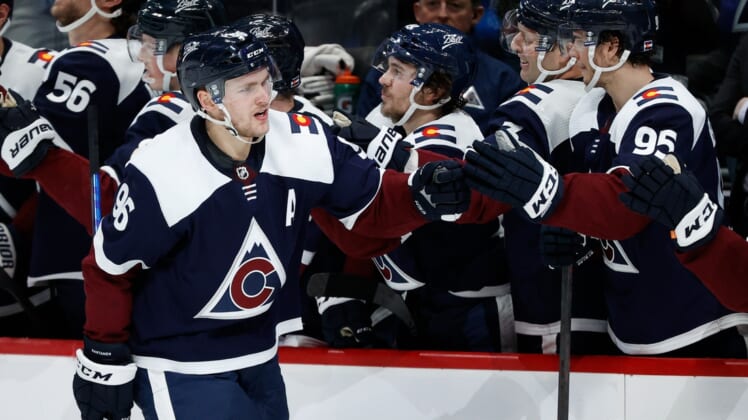 Coming off a successful homestand, David Pastrnak and the Boston Bruins will look to stay hot on the road as they visit one of the league’s best home teams and best team overall in the Colorado Avalanche on Tuesday night.

Pastrnak had a goal and an assist on Monday night, but newly re-signed goalie Tuukka Rask gave up five goals on 27 shots as the Bruins fell 5-3 to the Anaheim Ducks at home.

The goal was Pastrnak’s 20th of the season — tying Brad Marchand for the team lead and extending his point streak to six games (seven goals, three assists). Taylor Hall and Erik Haula each added a goal for Boston, which had won two straight and finished its homestand 5-2-0.

“I think that we just have to be ready for teams to be ultra-prepared for us,” Hall said. “We’ve had a really good run here and teams know that.”

Rask allowed five goals for the second time in three games since re-joining the team on a one-year deal following offseason hip surgery. The 34-year-old Rask is 2-2-0 with a .844 save percentage and a 4.28 goals-against average.

“Kind of the inconsistency within the game, and game in and game out, (it) hasn’t been there and I just gotta fix that,” Rask said. “Yeah, not satisfied, obviously.”

Against the Avs, Rask is just 1-6-1 with a .919 save percentage and a 2.35 goals-against average. Bruins backup goalie Linus Ullmark has never faced Colorado across his seven NHL seasons.

Boston has won all three of its road games in the new year.

Colorado is coming off a 2-0 win over the Chicago Blackhawks to extend its franchise-record home winning streak to 16 games.

Mikko Rantanen scored a goal for a team-leading 22nd time and Nazem Kadri added his 16th of the season, while goalie Pavel Francouz stopped all 24 shots he faced for his second shutout of the campaign.

After a scoreless opening period, Kadri scored on a power play at 11:24 of the second before Rantanen added some insurance at 6:41 of the third.

“The whole third period we were patient, we did what we needed,” Francouz said. “It was a huge test for us, and we passed.”

Colorado improved to 18-2-1 at home has won its last seven games overall. With the win, the Avalanche increased their season point total to 61, matching the Florida Panthers and Tampa Bay Lightning for the most in the league heading into play Tuesday.

Francouz won his only prior appearance versus Boston, stopping all 16 shots he faced in Colorado’s 4-1 road victory on Dec. 7, 2019.

Meanwhile, Avs starting netminder Darcy Kuemper is winless in five career starts against the Bruins, going 0-5-0 with a .893 save percentage and a 2.64 goals-against mark.

Colorado was set to visit Boston on Dec. 23, but the game was postponed amid the NHL’s COVID-19 schedule pause. It will be the first meeting between the Avalanche and Bruins since that Dec. 7, 2019 contest.