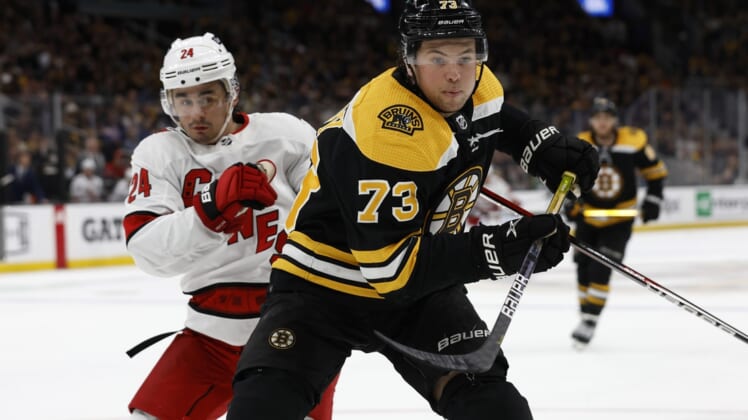 Boston Bruins defenseman Charlie McAvoy cleared COVID-19 protocol on Tuesday and was flown to Raleigh, N.C., to suit up for Game 5 of Boston’s first-round playoff series against the Carolina Hurricanes.

McAvoy was a late scratch for the Bruins’ Game 4 win over Carolina due to the protocol. Bruins coach Bruce Cassidy had said earlier Tuesday that McAvoy would not be available for Game 5 either.

Then, several reporters spotted McAvoy arriving on his own to PNC Arena in Raleigh a few hours before the 7 p.m. puck drop. ESPN reported that Bruins ownership organized a private jet for him to fly down in time for the game.

McAvoy tallied career highs of 10 goals and 46 assists (56 points) in 78 regular-season games in his fifth NHL campaign, all spent with Boston. He added two assists in the first three games of the Hurricanes series.

The Bruins will still be without defenseman Hampus Lindholm, who has sat out since absorbing a big hit from Carolina’s Andrei Svechnikov in Game 2. McAvoy and Lindholm usually comprise Boston’s top defensive pairing.

The series is tied 2-2. Game 6 is scheduled for Thursday in Boston.