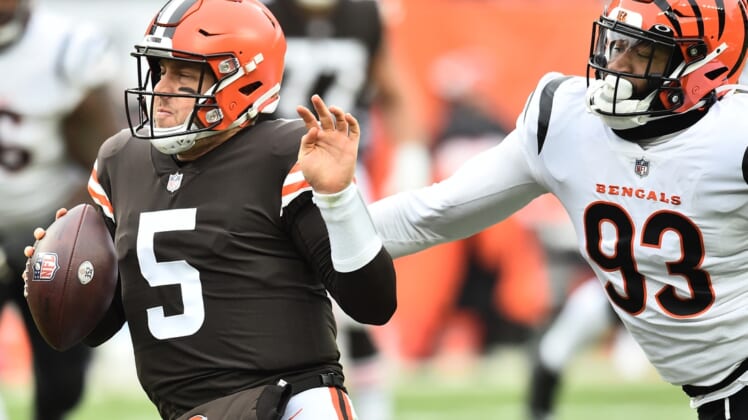 The Cincinnati Bengals won the AFC North, but the host Cleveland Browns continued their recent dominance in this interstate series with a 21-16 victory in the regular-season finale on Sunday.

Cleveland (8-9) snapped a three-game skid and ended a disappointing season with their fourth straight win over the Bengals (10-7), who clinched the division title and a playoff spot a week ago.

Case Keenum improved to 2-0 this season as the Cleveland starting quarterback and completed 17 of 24 passes for 176 yards with two touchdowns and an interception as a replacement for the injured Baker Mayfield. D’Ernest Johnson powered the offense with 123 rushing yards and a touchdown on 25 carries.

The Bengals played backups virtually across the board — including quarterback Brandon Allen in place of a resting Joe Burrow — thanks to a secured playoff spot in hand and more than a half-dozen additions to the reserve/COVID list during the week.

The one notable exception was wide receiver Ja’Marr Chase, who played the first five offensive snaps and then was subbed out. It was enough for Chase to catch two passes for 26 yards, which gave him the Cincinnati single-season receiving yardage record of 1,455 yards — topping Chad Johnson (2007, 1,440).

The Bengals finished with a season low of 182 total yards, had seven punts, and just 11 first downs. Allen was 15 of 29 for 136 yards and a touchdown; he was sacked four times. The Browns more than doubled the Bengals’ yardage (376).

The Bengals even used a backup kicker, as Elliott Fry hit a 36-yard field goal with 5:05 left in the third quarter to close to within 14-10.

The Browns put the game away with 7:14 left as Keenum flipped a 10-yard touchdown to rookie Demetric Felton for a 21-10 lead. Allen threw a 4-yard touchdown to Chris Evans with 2:26 left, but the Bengals failed on a two-point conversion and Cleveland recovered the ensuing onside kick.

Keenum was sharp early, and piloted two early touchdown drives for a 14-0 lead for the Browns. He found Jarvis Landry for a 26-yard score late in the first quarter, and Johnson made it 14-0 with his 4-yard touchdown run early in the second quarter.

But Keenum let Cincinnati hang around as well. Wyatt Ray’s strip-sack on Keenum led to Trayvon Henderson’s 29-yard fumble return touchdown to get the Bengals on the board. Keenum was then picked off by Mike Hilton in the end zone on the final play of the first half.

Cleveland outgained Cincinnati 233-65 in the first half as Allen hit 6 of 13 passes for just 58 yards. The Bengals had three first downs in the half compared to 15 for the Browns.