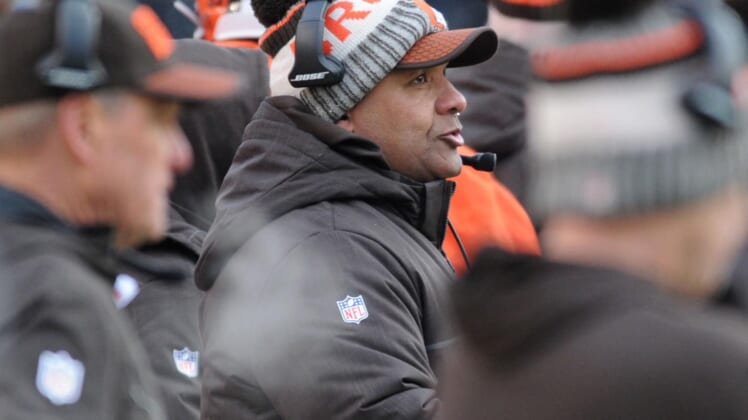 The Cleveland Browns fell to the Pittsburgh Steelers on Sunday. It not only completed an 0-16 season, but moved the team to 1-31 over the last two seasons. Going back to the final games of the 2011 season — coach Hue Jackson’s one and only year as head coach of the Oakland Raiders — he’s now 2-35 over his last 37 games.

But despite those unfathomably bad records, owner Jimmy Haslam quickly made it known that Jackson will be back in 2017.

But Haslam didn’t stop there.

Rather than defending the move by citing the need for stability and consistency at such an important job, Haslam dropped this nugget.

The defense of a coach “not losing his magic” works so much better if we’re talking about someone like Pete Carroll. Yes, his Seattle Seahawks aren’t as good as they once were. But the situation in Seattle isn’t completely hopeless. So, while we may disagree if Paul Allen we’re to say that Carroll hasn’t lost his magic, we could at least see where he’d be coming from. But this? If Haslam really doesn’t feel that Jackson has lost his magic, what is he looking at?

Of course, Haslam was not the only one unleashing bizarre quotes.

Jackson — who will be jumping into Lake Erie at some point — produced some head scratchers as well. Notably, he gave us this gem.

#Browns Jackson: “I don’t think anyone else could’ve done this job for the past 2 years”

This is an awfully unusual time to get cocky.

We understand that coaching in the NFL is a difficult job. It’s always easy to be the Monday Morning Quarterback and second-guess coaching decisions with the benefit of hindsight.

But literally anyone walking the face of the earth could have, at least, matched 2017’s output. A newborn baby who can’t talk. Someone living in Eastern Europe who’s never seen a football game before. Heck, my grandfather who’s been dead for 21 years. Literally any one of them could have at least matched your 0-16 output in 2017. It’s not possible to do worse. If we go back to 2016, it’s only marginally more possible.

If you’re a fan of a team that misses the playoffs, the last day of the season is bittersweet. You don’t get to see your team anymore, which is bitter. But your team’s record instantly moves to 0-0 and you can begin to look forward to free agency, the draft, training camp, and eventually, next season.

But if you’re a fan of the Browns, how could you possibly feel upbeat looking ahead? Sure, you have two high draft picks. But after this press conference display, do you have any confidence that this team will get either of them (let alone both) right?

The owner and coach seem locked into a battle as to whose quotes can make the least sense. Fittingly enough for Cleveland’s 2017 season, neither of them won. We just have to call it a tie. Because to anyone who’s been paying attention, it’s impossible to make even a degree of sense out of these things.

If you’re not a Browns fan, just laugh. If you are, you need a good, long hug.