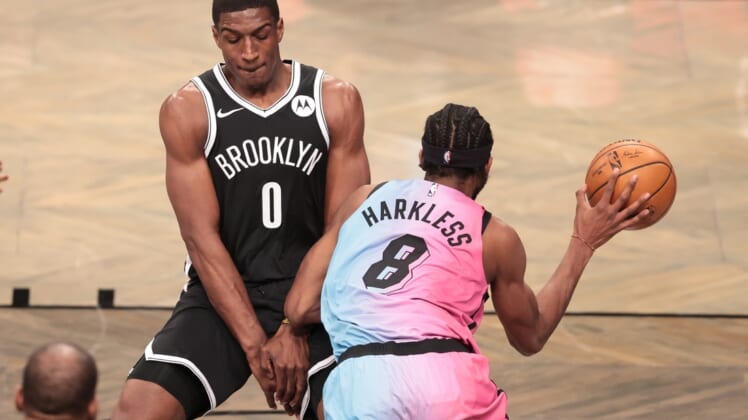 Kevin Durant scored 31 points as the Brooklyn Nets never trailed and survived multiple fourth-quarter comeback attempts by the Miami Heat and a career-high 41-point night by Bam Adebayo in a 128-124 victory Saturday night in New York.

Kyrie Irving added 18 of his 28 points in the fourth, including 10 in the final 2:41. Joe Harris added 23 and tied a career-high with seven 3-pointers. James Harden did not make a basket until the fourth and finished with 12 points and 11 assists as Brooklyn shot 53.7 percent, tied a season best with 19 3-pointers, and collected a season-high 34 assists.

Adebayo surpassed his previous career high of 30 points on Dec. 10, 2019 and made 14 of 20 shots but did not hit a basket in the final 5 1/2 minutes. Goran Dragic added 19 while Duncan Robinson and Kendrick Nunn finished with 18 apiece as the Heat shot 70 percent in the fourth and 47.2 percent overall.

The Nets rebounded from two losses in Cleveland by starting off fast, leading by as many as 18 before surviving Miami’s comebacks in the fourth.

After Miami called a timeout, the game ended when Dragic’s 3-point try was well short, as the Nets did not guard him to prevent a potential four-point play.