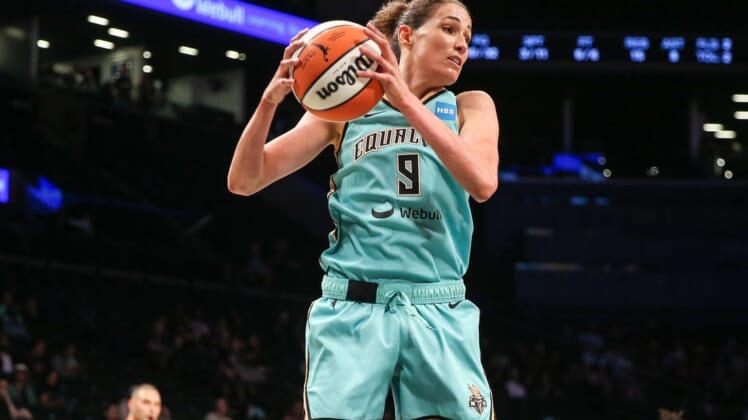 Brionna Jones scored 21 points as the host Connecticut Sun pulled away down the stretch for an 82-63 victory over the struggling New York Liberty on Tuesday afternoon in Uncasville, Conn.

The Sun (17-9) rebounded from a 12-point home loss to the Las Vegas Aces and withstood leading scorer Jonquel Jones missing a second straight game in the COVID-19 health and safety protocol.

Brionna Jones made 9 of 15 shots from the floor.

Alyssa Thomas added 18 points as the Sun shot 49.2 percent for the game and outscored New York 29-13 in the final 10 minutes. Thomas also collected 13 rebounds and had six of Connecticut’s 11 steals as the Sun scored 23 points off 19 turnovers

Reserve DiJonai Carrington contributed 14 of her career-high 18 points in the fourth quarter while Natasha Hiedeman finished with 10 points for the game.

Sabrina Ionescu scored 13 points and Stefanie Dolson added 12 for the Liberty (9-16), who have dropped four in a row and six of their last seven games. Ionescu shot 6 of 18 from the field.

Natasha Howard was held to four points and had seven turnovers for New York, which shot 36.4 percent from the floor.

A competitive opening quarter ended in a 19-19 deadlock and New York held a 31-28 lead on a 3-pointer by Sami Whitcomb with 5:04 remaining. The Sun ripped off seven straight points and outscored New York 11-4 the rest of the half for a 39-35 lead.

After Thomas hit a layup to give the Sun a 43-35 lead with 8:20 remaining, New York countered with a 10-2 run on a 3-pointer by Ionescu nearly three minutes later. The Sun never gave up the lead, however, and took a 53-50 advantage into the fourth.

Consecutive hoops by Thomas pushed the lead to 59-52 with 7:36 remaining and Carrington’s 3-pointer extended the margin to 64-55 with 6:45 left. After a basket by Ionescu, the Sun scored the next 16 points and clinched the win on another a basket by Carrington with about 2 1/2 minutes left.