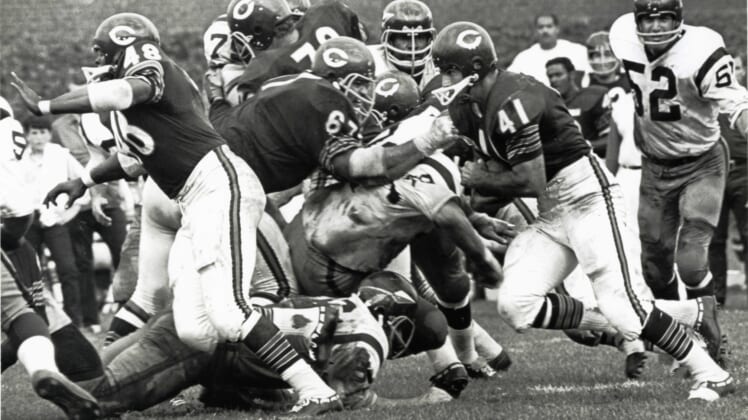 Back on June 16 of 1970, a well-known running back on the Chicago Bears died at the young age of 26. Brian Piccolo removed himself from a game against the Atlanta Falcons the previous November as he had a hard time breathing. It caught his teammates by surprise.

Upon the Bears’ return from Atlanta, Piccolo recevied a medical examination and was diagnosed with cancer (embryonal cell carcinoma). After battling the disease, he died within months.

Having played for Chicago for four seasons, Piccolo worked himself into a starting role after being an undrafted free agent from Wake Forest. He gained the respect of his teammates. He acquired friendships. The running back’s tragic death impacted the team and its fan base big time.

Now, 52 years to the day after his death, the Bears are paying tribute to the man. During minicamp all 90 player on the roster were see wearing his No. 41 jersey. It was a pretty awesome scene at Halas Hall in Bourbonnais.

None of these players were alive when Brian Piccolo starred in the same backfield as franchise legend Gale Sayers. But we’re pretty sure most of them know about his legendary story and the rallying cry of hope and inspiration that came with him valiantly fighting an ugly disease.

The legend of Brian Piccolo has lived on through generations

Less than 18 months after Piccolo’s death, a made-for-television movie named Brian’s Song was released focusing on the relationship between Piccolo and Sayers. It was a smash success with James Caan playing the former and Billy Dee Williams portraying Sayers.

Since then, it’s considered the only movie that has made pretty much every grown man cry. The focus was on the relationship between the two teammates leading up to Piccolo’s death.

It showed generations of football fans that the game isn’t defined simply by a macho culture. That relationships are cultivated. That true heroism can be be found off the field.

It’s great to see another generation of Bears players honor Piccolo as a way to help his legend grow and his story remain on the front burner. We all can learn a lot about how he lived and how he fought until the end.