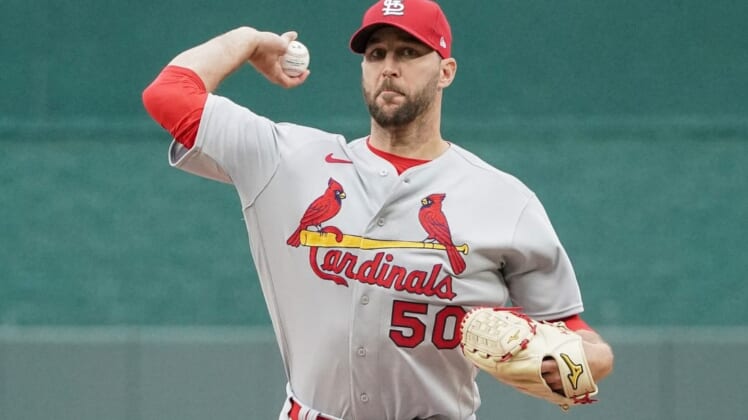 The Milwaukee Brewers and St. Louis Cardinals will resume their battle for National League Central superiority Thursday night while opening a four-game series.

The teams split a four-game series in Milwaukee earlier this season. The rivalry shifts to Busch Stadium in St. Louis as the division-leading Brewers arrive with a 3 1/2 -game lead over the second-place Cardinals.

St. Louis had their four-game winning streak snapped Tuesday night with an 8-1 loss to the Toronto Blue Jays. Milwaukee won two of three games in San Diego to kick off an 11-game road trip, despite missing key players.

“It’s just a testament to our team,” Brewers reliever Devin Williams told Bally Sports Wisconsin. “One guy goes out, the other guy fills in. It’s a long season and we’re probably going to have to do some more of that and I think we’re ready for it.”

Outfielder Hunter Renfroe landed on the injured list with a hamstring strain. He joined shortstop Willy Adames, who is still working his way back from a high ankle sprain, on the IL.

Starting pitcher Freddy Peralta went on the IL with a shoulder injury and closer Josh Hader has been on the family medical emergency list. Brewers manager Craig Counsell moved Williams into the closing role and worked him three games in a row for the first time.

Milwaukee will start Eric Lauer (4-1, 2.16 ERA) in the series opener. He is coming off a 7-0 victory over the Washington Nationals on May 20. He struck out five batters, walked nobody and allowed five hits in that game.

Lauer is 1-1 with a 7.90 ERA in four career appearances against the Cardinals, including three starts.

The Cardinals will counter with Adam Wainwright (5-3, 2.87 ERA), who allowed just three runs in 20 innings while winning his first three starts this month.

After failing to complete six innings during a span of three starts, Wainwright has worked 26 innings in his last four while adding stability to the injury-depleted Cardinals rotation.

“Going deep into the game, you are going to give your team a chance to win that game,” Wainwright told MLB.com. “That’s the main thing for me . . . I want to lead the league in innings this year. I missed a start already, which bothers me a little bit, but that means I have to go deep in the games from now on. If you lead the league in innings, usually, you are going to have a chance to win more games.”

Back on April 14, Wainwright allowed four runs on eight hits and two walks in 4 1/3 innings of a 5-1 loss at Milwaukee.

St. Louis catcher Yadier Molina has been on bereavement leave but is expected to return to active duty to make his 313th career start with Wainwright.

The Cardinals will be missing outfielders Tyler O’Neill (shoulder impingement) and Dylan Carlson (hamstring strain) from the batting order. Three rookie hitters will get their first taste of the Brewers rivalry: infielder-outfielders Juan Yepez and Brendan Donovan and second baseman Nolan Gorman.