Brewers aim to bounce back against Diamondbacks 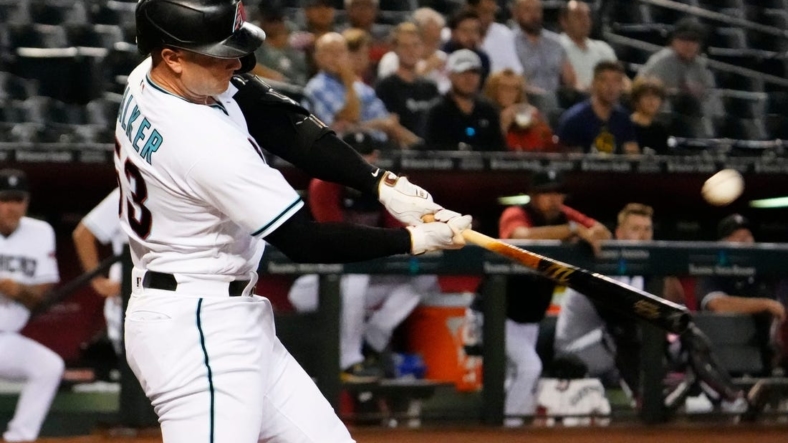 The Milwaukee Brewers can’t afford too many listless efforts as they try to make up ground in the National League wild-card race.

The Brewers will attempt to bounce back from a shaky performance when they battle the Arizona Diamondbacks on Friday night in the second contest of a four-game set in Phoenix.

Arizona won the opener 5-0 on Thursday, its seventh victory in the past nine games.

Milwaukee had just four hits — all singles — while falling three games behind the San Diego Padres in the race for the National League’s third and final wild-card spot. The Brewers are 6 1/2 games behind the first-place St. Louis Cardinals in the NL Central.

Time is winding down on Milwaukee, which went just 12-15 last month and opened September with a whimper.

“We have to worry about playing games and beating teams,” Milwaukee manager Craig Counsell said after the defeat. “We didn’t do enough to do that (Thursday night).”

Meanwhile, the Diamondbacks are playing solid baseball and are 22-16 since the All-Star break. The team that went 52-110 last season stands just six games below .500 with 32 games left.

Arizona thrived on timely hitting in the opener as all five runs scored with two outs.

Christian Walker hit a two-run homer in the first, Geraldo Perdomo had a run-scoring single in the second and Josh Rojas slugged a two-run double high off the center field wall in the sixth.

“Our identity has really come out lately,” Rojas said. “Our real identity is to put quality at-bats together and whether that’s no out, one out, two outs, it’s just trying to get the next guy to the plate.

“When you have that mentality, usually you start to drive those two-out runs in.”

Arizona manager Torey Lovullo, who had his option for 2023 picked up earlier this week, was impressed with the three at-bats.

“It’s a lot of little things are taking place inside of each at-bat,” Lovullo said. “It’s a stubborn approach. It’s an all-field approach. We can turn on the baseball and drive it and we’re fairly unpredictable. We don’t shut down and we’re moving in the right direction.”

Walker belted his 31st homer of the season, two more than his previous high set in 2019.

“He just irritated his neck on one of the swings in that second at-bat. We’re day-to-day,” Counsell said. “I think there’s a chance he misses a couple of days, but I wouldn’t worry about it past that.”

Former Milwaukee right-hander Zach Davies (2-4, 3.82 ERA) will start for the Diamondbacks on Friday night. Left-hander Eric Lauer (10-5, 3.58) will take the ball for the Brewers.

Davies, who pitched for Milwaukee from 2015-19, is 0-1 with a 6.48 ERA in two previous starts against the Brewers. Both outings came last season when Davies was a member of the Chicago Cubs.

Davies, 29, has received no-decisions in seven straight starts and is 0-3 over his past 14 outings. He allowed two runs and six hits in 5 2/3 innings against the Chicago White Sox on Sunday.

Lauer has won back-to-back starts and four of his past six outings.

The 27-year-beat the Cubs on Sunday when he gave up four runs and six hits over five innings. The four runs are the most he has allowed during the six-start stretch.

Ketel Marte is 7-for-14 with two homers against Lauer.