Colorado Rockies starting pitcher Brett Anderson is known for being quite the entertaining tweeter, but he took this a bit overboard on Tuesday when going after former Houston Astros pitcher Lucas Harrell. 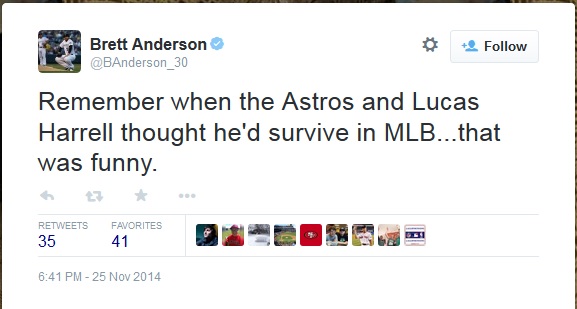 I follow Anderson on Twitter, and he’s usually good for a conversation or two throughout the week. With that said, this was completely unprofessional from a pitcher who is a free agent and hasn’t exactly had his own success at the Major League level as of late.

For his part, Harrell responded with class.

There might be some type of internal rivalry going on here, but it’s readily apparent that Harrell handled the situation better than Anderson. The interesting dynamic here is that Houston is said to be interested in Anderson’s services. Yeah, that’s not going to happen now.

On a completely related note, when are professional sports teams going to start banning their players from social media? If the last week is any indication, it will happen sooner rather than later.

H/t CBS Sports for the image.