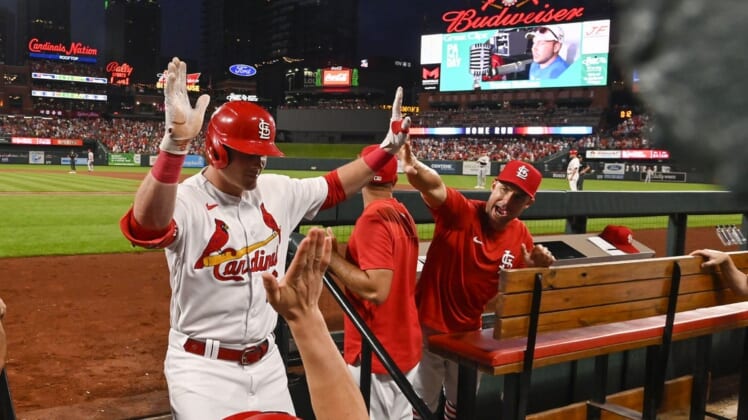 Donovan went 2-for-3 with a sacrifice fly and a two-run single as the Cardinals won for just the sixth time in 16 games. Dylan Carlson hit a RBI double, drew three walks and scored twice.

Ryan Helsley worked out of a bases-loaded jam in the ninth inning to earn his eighth save.

Starting pitcher Hunter Greene (3-11) allowed four runs on five hits in five innings for the Reds, who took just their second loss in eight games. He struck out six batters and walked three.

Cincinnati’s Jonathan India led off the game with a single. Brandon Drury hit a double, and Kyle Farmer’s two-out, two-run single put the Reds up 2-0.

In the bottom of the inning, Tommy Edman hit a single and Carlson and Paul Goldschmidt walked. Nolan Arenado and Donovan hit sacrifice flies to tie the game 2-2.

The Cardinals moved ahead 3-2 in second inning on two-out doubles by Edman and Carlson.

The Reds tied the game 3-3 in the third inning when Tommy Pham walked with two outs, moved up on a wild pitch and scored on Joey Votto’s single.

They could have scored more after Farmer walked and Donovan Solano hit a single, but Votto stopped at third base and Farmer ran into an out there.

The Cardinals upped their lead to 5-3 in the sixth inning and could have scored more. Donovan, leading off, was thrown out at second base after hitting a ball off the right field wall. Tyler O’Neill and Gorman then walked, and Corey Dickerson hit an RBI single.

Carlson and Goldschmidt drew walks to start the seventh inning. They advanced on a balk and scored on Donovan’s single to make it 7-3.