Breaking Down Henry Ruggs III’s Early Fit Within the Offense 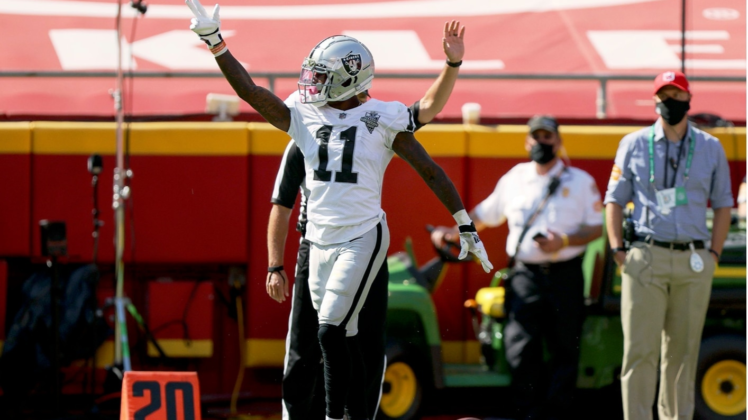 Right or wrong, many in Raider Nation are concerned with the usage and involvement of first-round draft pick Henry Ruggs III in the team’s offense. We take a look at where the talented young wideout is so far this season.

When the Las Vegas Raiders selected Henry Ruggs III with the No. 12 overall pick, many fans thought about the late Cliff Branch, who frequently beat defenders downfield in the 1970s and 1980s, and the resurrection of a popular mantra within the organization: “Speed Kills.”

Perhaps head coach Jon Gruden tapped into his inner Al Davis. When he returned for his second stint with the Silver and Black, he probably liked what he saw in a division rival as well. In a modern-day comparison, NFL analysts drew a connection between Ruggs and Kansas City Chiefs All-Pro wideout Tyreek Hill.

“…He’s the closest thing to Tyreek Hill that I’ve seen since Tyreek Hill entered the league,” Jeremiah said. “And just looked like he’s been on a different speed than everybody else. This kid does the same thing. He’s so sudden off the line of scrimmage. It’s instant death for corners. He’s just by them and it’s over.”

Thus far, we’ve seen Ruggs leave defensive backs in the dust on several occasions. He played a big role in the Raiders upset victory over the Chiefs at Arrowhead Stadium in Week 5, hauling in two catches for 118 yards and a touchdown.

However, just like Ruggs’ breakout performance versus the reigning champions, his flashes have come few and far between. Aside from Week 5, he had a good first half in the season opener against the Carolina Panthers before a leg injury severely limited him in the second half.

In six contests, Ruggs has 10 catches for 220 yards and a touchdown. Fans who expected to see him routinely beat defensive backs for big catches have become a bit concerned with his lack of targets (21).

While analysts had high expectations for Ruggs because of his first-round draft pedigree and capabilities, perhaps we have to adjust our understanding of what the Raiders need from him with their current roster makeup.

Does Ruggs Need to Be a Prototypical No. 1 WR?

Vegas took Ruggs as the first wide receiver off the board. So, one would expect he’s due for a significant workload right out of college. Gruden and general manager Mike Mayock had a failed experiment with Antonio Brown, and the offense needed a dynamic weapon on the perimeter.

Once Tyrell Williams went on season-ending injured reserve with a torn labrum, Ruggs seemed position for a lot of looks in the passing game. We’ve witnessed the complete opposite.

Quarterback Derek Carr hasn’t targeted Ruggs more than five times in a contest. Gruden put the onus on himself and the receiver to fix the issue.

Despite the need to ramp up Ruggs’ usage, don’t forget who Gruden is as a play-caller. He wants to establish the ground attack. The Raiders rank seventh in rush attempts and 26th in pass attempts. They’re a run-first team that’s capable of taking shots downfield.

With tight end Darren Waller as the go-to target, Carr’s trust in wideout Hunter Renfrow and Nelson Agholor’s emergence, Ruggs doesn’t have a clear pathway to a high-volume role. That’s not an excuse to limit his potential, but the offense isn’t designed to rely on a No. 1 wide receiver.

Fortunately, the Raiders have enough pass-catching weapons that they don’t need Ruggs to haul in eight to 10 targets per contest. Gruden’s run-dominant offense with one of the league’s best receiving tight ends and a trio of dual-threat running backs allow the wide receivers to play complementary roles.

It’s also key to understand what Henry Ruggs III was at Alabama and where the bulk of his receptions occurred. Many fans and analysts don’t have a clear understanding of that either.

For now, expect the Raiders to use Ruggs as an additional (explosive) asset rather than a featured component to the aerial attack.

Going into the 2020 draft, CeeDee Lamb, Jerry Jeudy and Ruggs generated the most buzz among the wide receivers. Most mock drafts had them listed top three at the position in some order. Fair or not, analysts will compare the three wideouts for the length of their careers despite the differences in their roles.

Here’s the problem though: the 12th overall pick in the draft should see more than 21 targets in six contests. Among first-year wideouts, Ruggs lists 12th in targets. Regardless of scheme, that’s inexcusable for a top draft selection.

At the moment, the disparity in target share shows the difference in offensive philosophy and roster makeup among the Dallas Cowboys, Denver Broncos and Raiders.

Lamb and Jeudy landed in spots where they’ve had to take on prominent roles either by design or because of injury. It’s no coincidence the two wideouts rank No. 1 and 2 (h/t Pro-Football-Reference), respectively, in targets among rookie receivers.

For fans, it’s hard to look at Lamb and Jeudy racking up big numbers and not worry about Ruggs, but he’s not expected to do the heavy lifting in the Raiders offensive system—that’s left to the ground attack and Waller on the perimeter.

Here’s the problem though: the 12th overall pick in the draft should see more than 21 targets in six contests. Among first-year wideouts, Ruggs lists 12th in targets (h/t Pro-Football-Reference). Regardless of scheme, that’s inexcusable for a top draft selection.

Fine-Tuning the Connection Between Derek Carr and Henry Ruggs

Other than a lack of targets, Carr talked about a timing issue with Ruggs, suggesting they still need to get in-sync on their connection (h/t The Athletic’s Vic Tafur):

In more than a handful of instances, we can see where Carr and Ruggs aren’t on the same page. Colton Lochhead of the Las Vegas Review-Journal highlighted one instance on a potential touchdown throw in Week 2:

Marcus Johnson of the Tape Don’t Lie podcast shared a more recent play in which Carr throws to a spot but Ruggs had a different idea against the Cleveland Browns:

Henry Ruggs III has to work on his toe-drag swag as well. In Week 8, against the Browns, he had seemed to haul in a touchdown catch, though debatable, the referees ruled him out of bounds:

In Week 9, Ruggs almost reeled in a pinpoint pass near the sideline, but he couldn’t tap his feet on the green:

While Carr and Ruggs need to work on their rapport, we’ve seen what it could become in short flashes. Fans want to see the highlight deep ball, but the Raiders should feature the rookie wideout on more intermediate routes and allow him to use his 4.27 40-yard speed after catches.

With shorter high-percentage throws, Carr and Henry Ruggs III can work on their timing while still going for the opponent’s jugular on an occasional deep ball for 40 yards downfield.