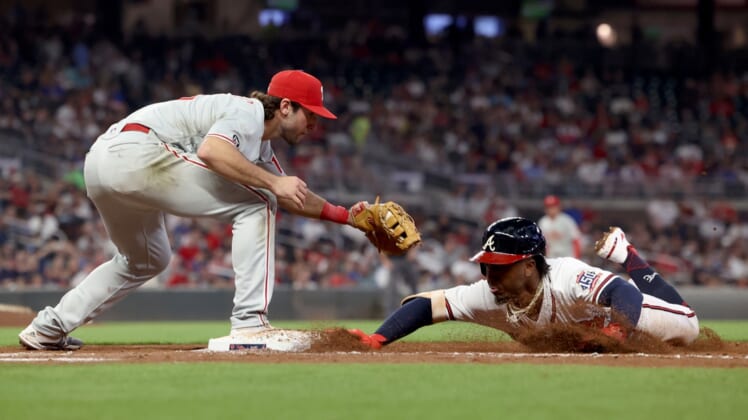 Max Fried pitched seven strong innings and Austin Riley drove in three runs to help Atlanta earn a 7-2 win over the visiting Philadelphia Phillies on Wednesday to put the Braves on the brink of a fourth consecutive National League East title.

The Braves (85-72) expanded their lead in the division to 4 1/2 games over second-place Philadelphia (81-77). Atlanta’s magic number to clinch the division is one. The Braves will look to complete their first home three-game series sweep of the season on Thursday.

Fried (14-7) allowed two runs, one earned, on four hits and no walks with six strikeouts. His streak of scoreless innings ended at 17, but the Braves are 10-1 over his past 11 starts. Fried has won seven consecutive decisions dating back to Aug. 3.

Riley was 2-for-5 with a walk while increasing his RBI total to 103. His seventh-inning double against Hector Neris provided two key insurance runs. Dansby Swanson, who went 3-for-4, followed with a two-RBI single off Sam Coonrod to complete the four-run seventh that put the game away.

The Braves jumped on Nola for two runs in the first inning. Riley drove in a run with a single and Adam Duvall contributed a run-scoring grounder for his league-leading 112th RBI of the season.

The Phillies made it 2-1 in the second with a two-out rally. Matt Vierling singled, went to third on a hit by Didi Gregorius and scored on an infield hit by Ronald Torreyes.

The Braves got the run back in the third inning when Eddie Rosario’s two-out double knocked in Ozzie Albies, who had led off with a single.

Philadelphia got back within a run in the sixth. Odubel Herrera led off with a double, took third on a passed ball and scored on Jean Segura’s grounder to shortstop.