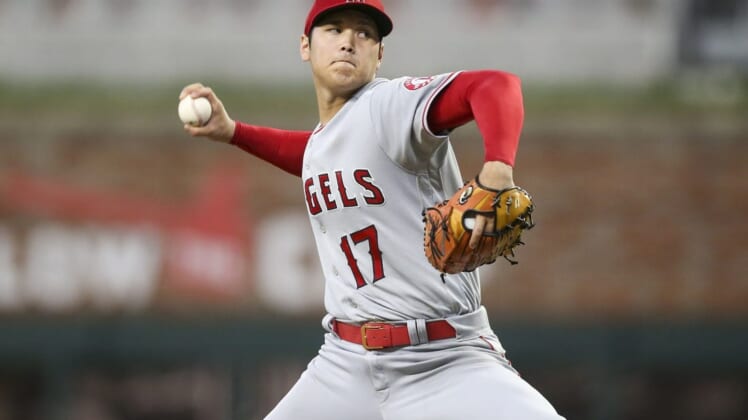 Matt Olson and Orlando Arcia both homered off Shohei Ohtani to highlight a seven-run seventh inning and help the Atlanta Braves defeat the visiting Los Angeles Angels 8-1 on Friday.

The inning started when Dansby Swanson ended Otani’s streak of retiring 15 straight batters with a leadoff walk. Olson followed with his 18th homer high into the right-field stands that broke the scoreless tie.

Arcia, who entered the game in the third inning when second baseman Robinson Cano experienced dizziness, ended Ohtani’s night when he added a three-run shot, his fifth.

The win enabled the Braves to cut New York’s lead in the National League East to 1 1/2 games. Atlanta has won eight of its last 11. Los Angeles has lost four straight and nine of its last 10.

Ohtani (9-5) was cruising until the seventh and looked visibly stunned at Olson’s towering home run. He pitched 6 1/3 innings and allowed six runs — matching his season high — on six hits, one walk and 11 strikeouts. It was his fifth straight game with 10-plus strikeouts. He had not allowed a home run since June 2.

The winning pitcher was rookie Dylan Lee (2-0), who struck out the side and allowed one hit in the seventh inning. Jackson Stephens worked a scoreless eighth with two strikeouts. Will Smith finished the game but allowed a solo homer to Jonathan Villar, his third, to start the ninth inning.

Austin Riley, who was 2-for-4, got Atlanta’s first hit. His leadoff double in the second inning extended his hitting streak to 14 games, the league’s longest active streak and the longest of his career.

Atlanta’s Marcell Ozuna hit his 18th homer in the eighth.

The game started with a 55-minute delay because of drizzle.