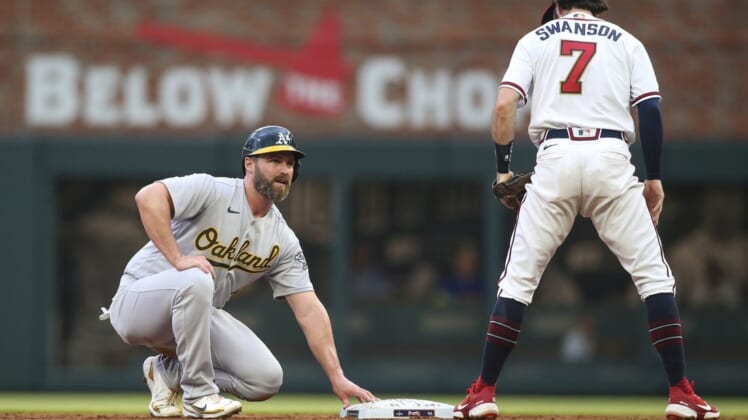 Rookie Michael Harris II slapped a two-run triple to spark a four-run rally and send the Atlanta Braves to a 13-2 win over the visiting Oakland A’s and extend their winning streak to seven games.

Harris pulled a curve ball from starter Jared Koenig down the first base line, scoring Marcell Ozuna and Adam Duvall, and racing to third for his first career triple. Austin Riley followed with a towering two-run homer to left field to cap the fifth-inning rally and helped send Oakland to its eight straight loss.

The Braves put the game away by scoring seven times in the seventh. Riley and Matt Olson delivered RBI singles and Ozzie Albies added a three-run homer, his seventh. That ended a 40-game homerless streak, the longest of his career. Albies had not gone deep since April 23. Adam Duvall added a two-run homer, his fourth.

Harris was 2-for-4 with a double, two RBI and two runs scored. Riley went 2-for-4 with three RBI. Each Atlanta starter got at least one hit.

Atlanta has won eight straight against Oakland, a streak that began June 12, 2005. The Braves improved to 15-6 against left-handers.

The winning pitcher was Ian Anderson (5-3), who pitched six innings and gave up two runs on six hits, two walks and five strikeouts.

Koenig (0-1) worked four innings and allowed four runs on five hits, two walks and three strikeouts in his major league debut. Oakland’s starting pitchers are 0-7 with a 5.34 ERA over the last 10 games.

Oakland scored two runs in the fourth on a wild pitch and Sean Murphy’s RBI single.

The Braves cut the lead to 2-1 in the bottom of the fourth on a sacrifice fly by Ozzie Albies.

William Contreras put Atlanta ahead 6-2 with a solo homer, his eighth.

Oakland’s losing streak is one shy of its season-long nine (April 29-May 8) and is the first time the team has had two losing streaks of eight-plus games since 2005. The A’s have been outscored 49-14 during the current losing streak.