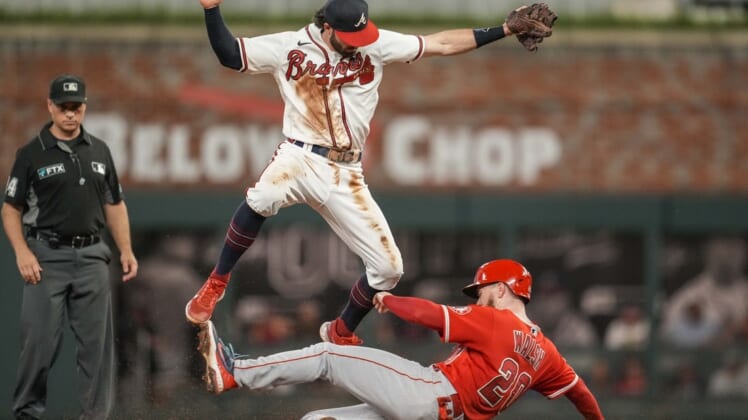 Atlanta third baseman Austin Riley will take a 15-game hitting streak into the finale of a three-game series against the visiting Los Angeles Angels on Sunday afternoon.

“He has become a really, really good hitter,” Atlanta manager Brian Snitker said. “It’s pretty cool for all of us that have seen him from the get-go to where he is right now and the development, and the growth, and maturity, confidence. Just what he’s doing is something pretty special.”

The Braves have overwhelmed the Angels in the first two games of the series, winning 8-1 on Friday and 7-2 on Saturday. Atlanta has won nine of its last 12 and has pulled to within a half game of the New York Mets in the National League East. Los Angeles has lost five straight and has dropped 14 of its last 16.

Anderson will be making his 19th start of the season. He has earned two straight wins and beat the Washington Nationals in his last outing on July 15, when he allowed one run on five hits, three walks and five strikeouts over 5 1/3 innings.

Anderson has never faced the Angels.

Detmers will be making his 15th start of the season. He did not receive a decision in his last outing on July 14 against Houston after throwing six innings and allowing two runs on five hits with three walks and six strikeouts.

Detmers has pitched to a 1.50 ERA with 13 strikeouts in two starts since being recalled from Triple-A Salt Lake for his second stint with the Angels this season.

“He found his pitches right away,” Los Angeles interim manager Phil Nevin said after Detmers’ last start. “I think in the past he might have had a hard time reeling it back in. That was a winning effort today.”

Detmers has never faced the Braves.

With Mike Trout on the injured list, the Angels continue to look for offense. A good sign Saturday was the three-hit performance, which included two doubles, from first baseman Jared Walsh. The Atlanta-area native and University of Georgia product is 4-for-8 in the series and has three doubles.

Atlanta left fielder Adam Duvall left Saturday’s game early with left wrist soreness. He mashed the wrist while trying to make a catch against the wall. He will be examined on Sunday morning and is listed as day-to-day.