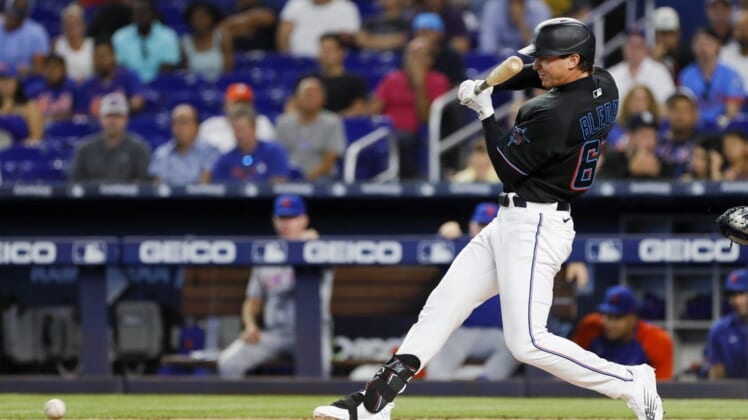 Brandon Nimmo pulled a two-run, tiebreaking homer in the eighth inning, leading the New York Mets to a 6-4 win over the host Miami Marlins on Friday night.

Edwin Diaz picked up his 23rd save of the year, striking out all three batters he faced. He threw 10 pitches — all of them for strikes.

The Mets, who have won four straight games, drilled eight extra-base hits, including a double by Nimmo, who had a three-RBI night.

Miami starter Sandy Alcantara — the frontrunner for the National League Cy Young Award — had an off night by his standards, allowing eight hits, three walks and four runs in five innings. He escaped with a no-decision, but his ERA rose from 1.81 to 1.99 in his shortest start since May 6.

Early on, Marlins rookie center fielder JJ Bleday saved a run in the first inning by charging in and making a diving catch on Daniel Vogelbach’s bloop.

In the bottom of the first, Bassitt retired the first two batters before Miami loaded the bases on Lewin Diaz’s walk, Avisail Garcia’s hit just past second baseman Jeff McNeil and Bleday’s check-swing single.
Miguel Rojas then dumped a soft opposite-field, three-run double just a foot inside the line in right.

New York tied the score in the second. The rally was set up when Mark Canha doubled to right, and nine-hole hitter Tomas Nido — with two outs — came back from a 0-2 count to work a walk. Nimmo then blasted an RBI double high off the center-field wall. Starling Marte then drilled a two-run triple to the gap in right-center.

Miami went ahead 4-3 in the second as Luke Williams walked, went to third on Jacob Stallings’ single and scored on a double-play grounder.

Marte tied the score in the fourth with his solo homer, which traveled 413 feet to right-center. One pitch after getting brushed back with a 97-mph fastball, Marte went deep on a heater at 98 for his 11th blast of the season.

New York took a 6-4 lead in the eighth as pinch-hitter Eduardo Escobar hustled his way to an infield single to shortstop, and, one batter later, Nimmo hit his 10th homer of the season, a 406-foot shot to right off Steven Okert (5-1).