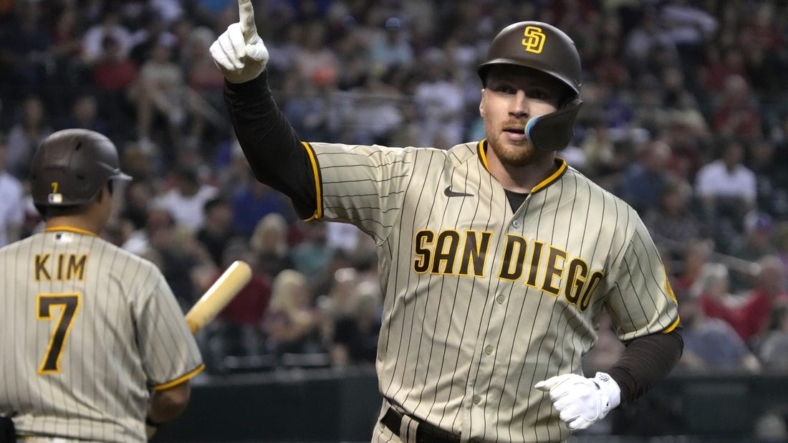 Snell (7-9) allowed one run — the first of two home runs by Christian Walker — on four hits and no walks with seven strikeouts.

Ten players contributed to San Diego’s total of 17 hits. One night earlier, the Padres managed only three hits in the series opener at Arizona while being shut out for the 10th time this season.

Drury hit his first homer of the game in the first inning, following Manny Machado’s two-out single with a drive into the left field seats.

Austin Nola made it 3-0 with his fourth homer of the season — and first in 73 plate appearances — off Diamondbacks starter Madison Bumgarner in the second. Drury’s second homer, in the fourth, upped the Padres’ lead to 4-0.

Drury was in his second game back after sustaining a concussion when he was beaned by the Los Angeles Dodgers’ Dustin May on Sept. 2. His second long ball of the night travelled 468 feet to left-center. It was his 27th of the season, his seventh as a Padre and his sixth against the Diamondbacks this year.

Walker’s homer in the bottom of the fourth cut the deficit to 4-1.

The Padres scored a final run off Bumgarner in the fifth and added seven runs against the Diamondbacks’ bullpen — the rout capped by Ha-Seong Kim’s solo homer in the ninth off Arizona catcher Carson Kelly.

Bumgarner (6-15), who has yet to post a win against the Padres in three seasons with the Diamondbacks, gave up five runs on eight hits and no walks with two strikeouts in five innings.

Kim and Jose Azocar each had three hits for the Padres. Drury and Juan Soto each had two hits and three RBIs. Nola and Azocar drove in two runs apiece.

The Padres (79-66) maintained their 1 1/2-game lead on the Milwaukee Brewers (77-67) in the race for the third National League wild-card berth. San Diego won for the just the second time in six games.