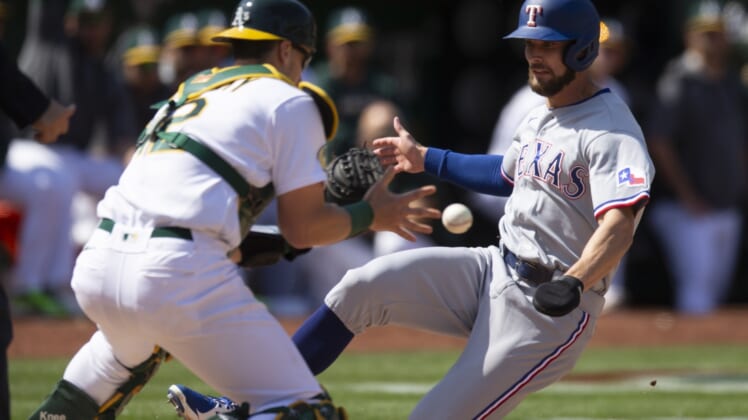 Brad Miller ended a scoreless deadlock with a two-out, two-run single in the eighth inning Saturday as the Texas Rangers beat the host Oakland Athletics 2-0 in a pitchers’ duel that featured just eight hits.

After rival Martin Perez had left following six shutout innings during which he allowed just two hits, A’s right-hander Frankie Montas (2-2) took a one-hit shutout into the eighth and got Kole Calhoun to ground out for the first out.

However, Adolis Garcia and Willie Calhoun followed with singles, prompting A’s manager Mark Kotsay to pull Montas in favor of Domingo Acevedo with runners at the corners.

The reliever got Jonah Heim to ground out to first, advancing pinch-runner Eli White to second, and Miller followed with a liner the opposite way to left field for the game-winning blow.

Initially, White had been called out at the plate after a strong throw from left fielder Tony Kemp, but the Rangers challenged the call, claiming that A’s catcher Sean Murphy had blocked the plate.

The call was reversed on replay, allowing a second run to score, after which Kotsay was ejected for arguing.

Brock Burke (2-0) was awarded the win after pitching a scoreless seventh in which the A’s mounted their biggest threat of the game.

Brett Martin threw a 1-2-3 eighth and Matt Bush a perfect ninth for his first save, wrapping up Texas’ third straight win.

Perez did not get a decision after his six shutout innings, during which he walked one and struck out five.

The only hits he allowed were a two-out double by Nick Allen in the third and a two-out single by Cristian Pache in the fifth.

The A’s threat in the seventh consisted of a one-out double by Stephen Piscotty and a walk to Elvis Andrus. But Burke got Christian Lopes to pop out and Pache to ground to shortstop to keep the game scoreless.

Montas was charged with both Rangers runs on three hits in 7 1/3 innings. He walked one and struck out eight.

The doubles by Allen and Piscotty were the game’s only extra-base hits. No player had more than one hit.