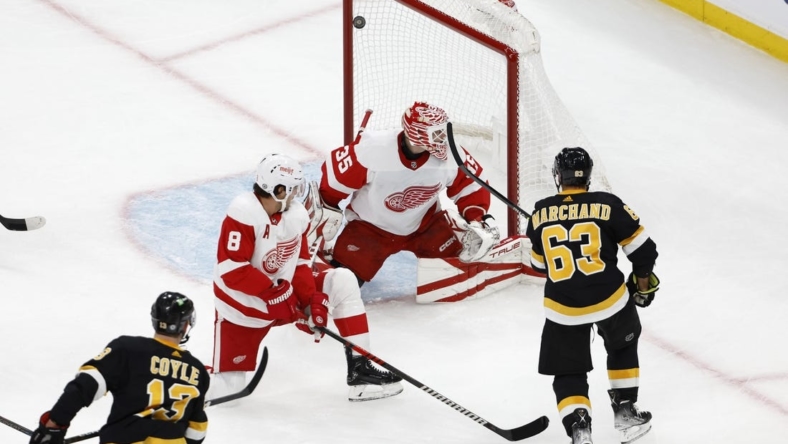 Brad Marchand scored two goals and added an assist in his first game of the season as the Boston Bruins downed the Detroit Red Wings 5-1 on Thursday night.

After returning from double hip surgery approximately a month ahead of schedule, Marchand assisted on Charlie Coyle’s goal in the first period, scored himself in the second, then started Boston’s three-goal spurt over just 1:39 early in the third.

Craig Smith added his first goal of the season and Jeremy Swayman stopped 28 shots for the Bruins, who have won four straight and improved to 6-0-0 on home ice.

Boston went 3-for-6 on the power play, thwarted all five Detroit power plays and had a 32-29 shot advantage.

The news wasn’t all positive for Boston as David Krejci didn’t return after taking a stick to the head from Detroit’s Michael Rasmussen in the second period. Krejci was later ruled out with an upper-body injury.

Adam Erne scored the lone goal and Ville Husso made 27 saves for Detroit, which was the last NHL team to lose in regulation and has now dropped back-to-back games.

The Bruins jumped in front at 13:42 of the first period after Detroit’s Elmer Soderblom had a shot hit the post and Swayman denied several quality opportunities including a partial Erne breakaway. For the opening goal, Coyle danced through traffic in the slot and flicked in a wrist shot.

Marchand doubled Boston’s lead 11:53 into the second, flicking a shot over Husso’s shoulder from the left circle on a power play.

Detroit made it 2-1 with 1:11 left in the middle frame as Erne’s shot from the high slot deflected past Swayman.

Rasmussen served only 14 seconds of his third penalty of the game (delay of game) as Marchand started Boston’s rapid three-goal run by jamming in a rebound at the 2:55 mark of final period.

Smith slotted one home from the bottom of the right circle only 35 seconds later before Pastrnak took Bergeron’s feed and ripped a one-timer from the left circle for another power-play goal at 4:34.