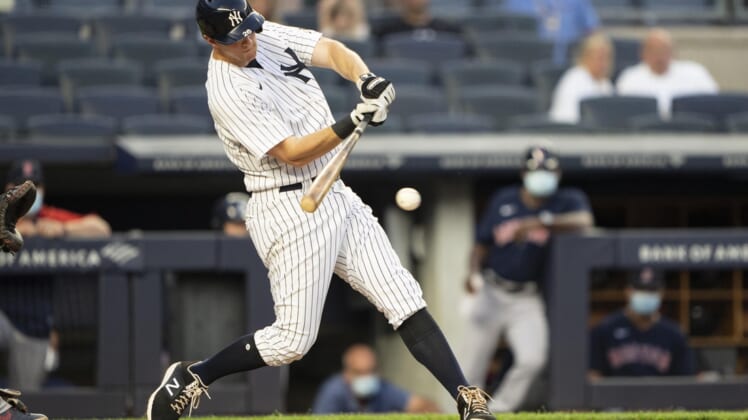 The Red Sox have won the first two games of the three-game set and six of their last nine. The Yankees have lost three straight and nine of 12.

Rafael Devers, who had a two-run single to put the Red Sox on the board in the sixth, led off the eighth with a single off Chad Green (0-4). After Hunter Renfroe struck out and Marwin Gonzalez popped out, Hernandez doubled on a 2-2 pitch.

The outburst made a winner of Garrett Whitlock (1-1), who tossed 1 2/3 scoreless innings. Adam Ottavino threw a perfect eighth and Brandon Workman issued a pair of two-out walks in the ninth before Matt Barnes earned his 14th save by striking out Kyle Higashioka.

Gonzalez had an RBI double to cap a three-run sixth inning. Renfroe, Vazquez and Alex Verdugo each had two hits.

Gleyber Torres homered and had three RBIs for the Yankees. Gio Urshela had two hits.

Rodriguez retired the first eight batters before allowing singles to Clint Frazier and DJ LeMahieu on consecutive pitches. The Yankees snapped the scoreless tie an inning later, when Urshela singled with one out and Torres followed with a homer, only the third of the year for the shortstop, who hit 38 homers in 2019.

Taillon carried a three-hit shutout into the sixth before he was chased in the midst of five straight one-out hits by the Red Sox. Verdugo singled and Xander Bogaerts doubled before Devers laced a two-run single. Jonathan Loaisiga entered and gave up a single to Renfroe and the go-ahead RBI double to Gonzalez.

The Yankees tied the score in the bottom half of the inning. With one out, Aaron Judge walked and went to third on a double by Urshela off Rodriguez. Whitlock then gave up a sacrifice fly to Torres.