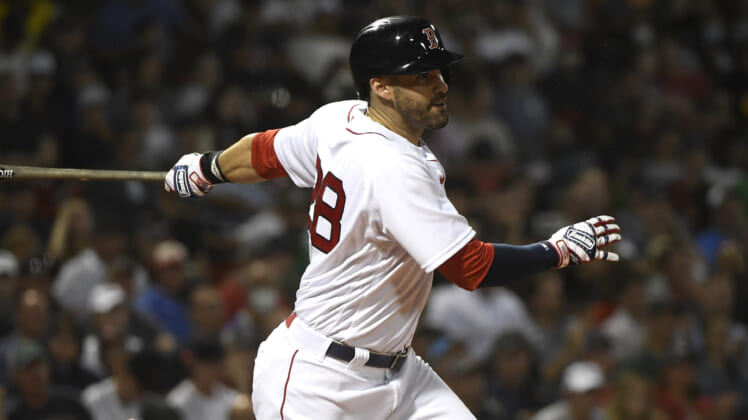 The Boston Red Sox are freefalling down the MLB standings and with injuries likely preventing the skid from coming to an end, the latest MLB trade rumors hint that J.D. Martinez could be among those headed out of Boston.

It’s a dramatic shift from where things stood a few weeks ago. Boston entered its final series in June with a 42-31 record, celebrating a seven-game win streak before a brutal AL East stretch. The Red Sox schedule presented them with an opportunity to prove they are a legitimate contender. Instead, their AL East Rivals maintained their dominance and Boston’s MLB postseason odds plummeted.

Heading into the final days before the Aug. 2 trade deadline, it appears executive Chaim Bloom and the organization have made a decision. Following repeated injuries and disappointing efforts, Boston is prepared to be sellers at the trade deadline.

Buster Olney of ESPN reported on the Baseball Tonight podcast that the Red Sox are now calling contenders around the league and listening to what they would offer for Martinez.

After struggling against their primary competition in the American League for most of the season, it appears Boston sees the writing on the wall. With far too many holes to fill on the roster and several prominent players eligible for free agency this winter, there’s a strong possibility the Red Sox are active in the days ahead.

Any return for Martinez will be impacted by his status as a half-season rental and his primary role as a designated hitter. In order to make him a more appealing option, the Red Sox might also need to be willing to attach cash to cover part of his contract.

With that said, there are a few potential MLB teams who could be interested in the All-Star slugger.

The Milwaukee Brewers rotation is one of the best in baseball when everyone is healthy. As for the bullpen, depth can be improved but the late-inning duo of Josh Hader and Devin Williams is the best in baseball. That leaves the lineup as the biggest area for improvement and the trade history between these two clubs suggests something could be worked out.

In exchange for including $3.5 million in cash considerations, Boston picks up a higher-end pitching prospect from the Brewers. Antoine Kelly is a starter right now dominating at High-A (11.69 K/9, 3.41 ERA), but his long-term role is likely a late-inning reliever with a devastating fastball-slider combo. Gaining that in exchange for a player the Red Sox would lose in free agency could be worthwhile.

The Red Sox and Tampa Bay Rays aren’t afraid of making trades with one another. Based on Boston’s direction and Tampa Bay’s desire to strengthen its lineup amid injuries, these two could match nicely. Thanks to the Rays’ prospect depth and Bloom’s familiarity with the farm system, a potential partnership feels even more realistic.

Boston agrees to eat more than half of the remaining salary owed to Martinez this season. In exchange, the Red Sox take a chance on Bick Bitsko. After undergoing labrum surgery in December 2020, the 20-year-old is a high-upside arm with a chance to become a starting pitcher with three quality pitches. It’s a risk-reward lottery ticket, but worth a gamble. As for Pinto, the 25-year-old can serve as Boston’s catcher in 2023 with Christian Vázquez a free agent.

Even after acquiring Daniel Vogelbach, the New York Mets want to keep bolstering their lineup. One advantage they would have compared to other interested teams pursuing Martinez, they could be willing to absorb the entirety of his contract to diminish the capital required in a trade.

Eric Orze, the No. 17 prospect in the Mets’ farm system per MLB Pipeline, is on track to make his MLB debut in 2023. The right-hand reliever boasts a stellar 33.5% strikeout rate and .226 batting average allowed this season at the Triple-A level. Boston strengthens its bullpen in the years ahead, while the Mets lineup gets a boost. In the end, it could work out nicely for both clubs.