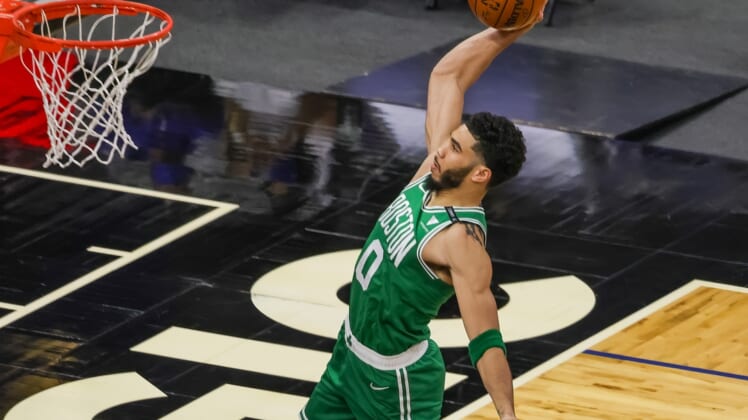 Kemba Walker led all scorers with 32 points in his return from injury to help the Boston Celtics strengthen their playoff positioning with a 132-96 win over the host Orlando Magic on Wednesday night.

Walker, who missed four games because of a left oblique strain, scored 18 of his points in the first half and reached 29 in 22 total minutes after scoring 11 straight.

Jayson Tatum scored 13 of his 27 points in the third quarter for the Celtics. Evan Fournier had 18 points in his first game back in Orlando after the Magic dealt him to Boston prior to the trade deadline.

Boston (35-31) won for the third time in four games after entering the day a half-game behind Miami for the sixth and final spot in the East that would avoid the postseason play-in round.

Mo Bamba, who set career highs in points (22) and rebounding (15) in the Magic’s win against Detroit on Monday, scored 19 and grabbed 15 boards against Boston.

Orlando (21-45) has already been eliminated from the playoff contention, but had won two straight and three of four after dropping six straight and 12 of 13.

Sindarius Thornwell went scoreless in 21 minutes of his Magic debut after signing a two-way deal with Orlando on Tuesday. The injury-riddled Magic only had nine players available against the Celtics.

Magic rookie guard Cole Anthony, who hit the game-winning 3-pointer against Memphis last Saturday, exited and went to the locker room after colliding with Bamba on a screen in the first quarter. Anthony later returned and finished with four points.

Boston led 63-45 at halftime and pushed its lead to as many as 36 in the second half.