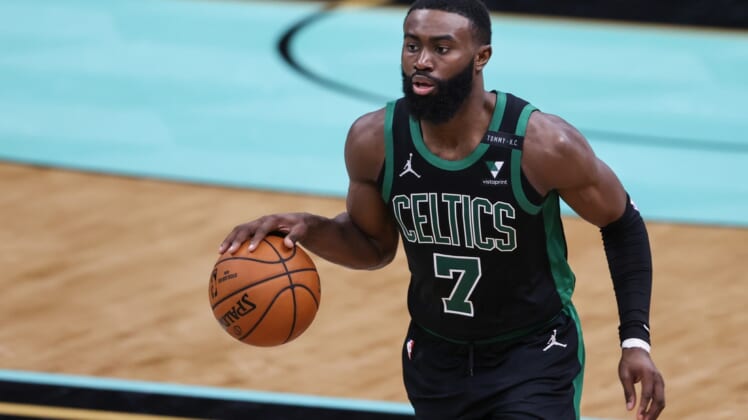 Boston Celtics guard Jaylen Brown, who sprained his ankle in a collision with teammate Jayson Tatum on Sunday, will miss Wednesday’s game at the Orlando Magic.

Brown, who went through a full practice Tuesday, had to be helped off the court with 40.4 seconds remaining in Sunday’s 129-119 loss to the Portland Trail Blazers after colliding with Tatum. Celtics coach Brad Stevens doesn’t think Brown will miss too much time.

“He’s very much day-to-day after that,” Stevens said after Tuesday’s practice.

Tatum, who suffered a leg injury in Sunday’s collision, also practiced fully on Tuesday and is on track to face the Magic.

Brown, who earned the first All-Star nod of his career in February, is averaging career-highs in points (24.7) and assists (3.4) per game while also grabbing 6.0 rebounds per contest.

Second in scoring to Tatum (26.5 points per game) on the Celtics, Brown is also shooting a career-best 48.4 percent from the floor and 39.7 percent from 3-point range

The Celtics (34-31), who are seventh in the Eastern Conference, have seven regular-season games remaining.