Brad Marchand and the Bruins will look to build on their momentum as their first-round series against the Washington Capitals shifts to Boston for Game 3 on Wednesday night.

Marchand scored just 39 seconds into overtime to give the Bruins a 4-3 win at Washington on Monday night to even the best-of-seven series at 1-1. The Capitals were 3-2 overtime winners in Game 1 Saturday after Nic Dowd scored 4:41 into the extra period.

Through eight periods, the Bruins and Capitals have each scored six goals and Boston holds a narrow 74-71 advantage in shots. 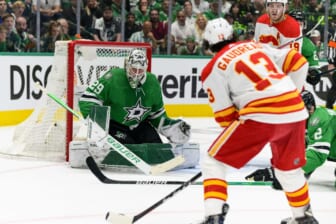 “Obviously, they’re hard games. They’re playing tough, they’re playing physical, and they’re not giving up a ton,” Marchand said. “It (was a) big one to win, but it doesn’t matter how good it feels. Game’s over and we’ve got to get prepared for the next one.”

Marchand’s winner was the fastest in overtime in franchise history, beating out the legendary Bobby Orr’s iconic leaping goal that finalized a sweep of the Stanley Cup Final against St. Louis on May 10, 1970, by one second.

Boston will needs its top line to show up like it did on Monday to take control of the series. After going scoreless in Game 1, the Bruins’ “perfection line” of Marchand, Patrice Bergeron and David Pastrnak combined for three points in the win.

Bruins right wing Ondrej Kase (upper body) missed his second straight game to start the series and his status is unknown for Game 3.

Washington goalie Vitek Vanecek missed Game 2 after exiting with a lower-body injury in the first period of the series opener. Craig Anderson, who celebrates his 40th birthday on Friday, started Monday’s game and made 44 saves after stopping 21 in relief of Vanecek in Game 1.

“It was a game that went back and forth with a lot of chances and a lot of looks. I thought Craig did a good job,” Capitals coach Peter Laviolette said after the loss. “We knew (the Bruins) were going to come back with a little more bite. … We shot ourselves in the foot a little bit with execution, and so there’s things that I think we can do better as we head to Boston.”

Capitals center Lars Eller suffered a lower-body injury in the second period of Monday’s game. The status of both Vanecek and Eller for Game 3 is uncertain.

Washington recalled forwards Connor McMichael and Brett Leason and defensemen Paul LaDue and Alexander Alexeyev from the Hershey Bears of the AHL ahead of Wednesday’s game.

Alex Ovechkin has been held without a goal in the series, but he recorded an assist in each of the Capitals’ first two games. The third game of a series often has been a launching point for Ovechkin, who has 11 goals and 14 assists in 21 prior Game 3 appearances. Nicklas Backstrom also has five goals and 15 assists in 19 career Game 3s.

The Capitals and Bruins split their four games played at TD Garden this season.

Wednesday will mark the Bruins’ first playoff game in Boston since losing Game 7 of the Stanley Cup Final against the Blues on June 12, 2019. The Bruins beat Carolina in the opening round of last year’s playoffs at the Toronto bubble before being eliminated by eventual champion Tampa Bay.