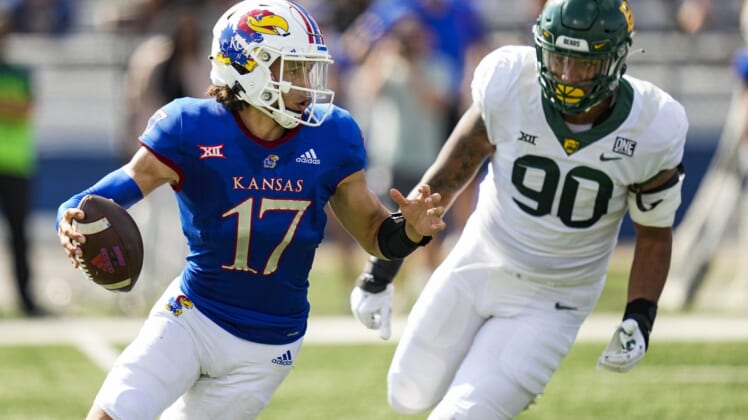 Gerry Bohanon passed for 269 yards and two touchdowns Saturday as Baylor breezed to a 45-7 win over Kansas at Lawrence, Kan.

The Jayhawks (1-2, 0-1 Big 12) took momentum in at halftime with a late score in the second quarter before going three-and-out on their first possession. Bohanon connected with R.J. Sneed on the next play from scrimmage to push the Bears’ lead to 21-7 at the 12:44 mark of the third quarter.

Baylor (3-0, 1-0) went on to score 31 unanswered points in the second half and posted its 12th straight win over Kansas. The teams finished ninth and 10th, respectively, in the Big 12 last season.

Abram Smith rushed for 122 yards and a touchdown. He has cracked the 100-yard mark in each of Baylor’s first three games. Sneed had six catches for 128 yards for the Bears, who balanced their 576-yard output with 307 rushing and 269 passing.

Kansas sustained its 12th consecutive loss in a Big 12 opener, a streak that dates to Mark Mangino’s last season (2009) as coach. Lance Leipold became the fifth Kansas coach involved in that skid.

Baylor settled for a 14-7 halftime lead after posting an early 9-0 advantage in first downs and a 14-0 lead with 13:42 left in the second quarter. Bohanon connected with Ben Sims for a 14-yard touchdown before Gavin Yates tacked on a 2-yard scoring rush.

At that point, the Bears had 178 total yards to negative-8 for the Jayhawks. But after two early three-and-outs, Bean rallied Kansas late in the half. He keyed a 76-yard touchdown drive with three completions, including a 5-yard score to Trevor Wilson with 58 seconds left.

The Bears’ Trestan Ebner logged a 50-yard punt return, had an 86-yarder nullified by a penalty and rushed for 72 yards.