Bo Nix accounts for 5 TDs as No. 8 Oregon routs Colorado 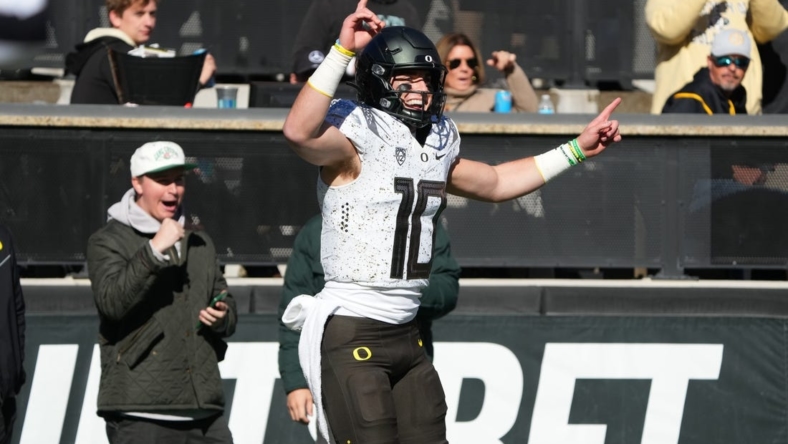 The Ducks (8-1, 6-0) remained the Pac-12’s only undefeated team in conference play, scoring more than 40 points for the eighth consecutive time, all in wins.

Oregon won its 27th straight game when scoring 40 or more points, and its 16th straight when leading at halftime.

Nix completed 20 of 24 passes for 274 yards before exiting in the fourth quarter. Bucky Irving rushed for 120 yards on 11 carries, including a 65-yard run, and threw an 18-yard touchdown on a trick play to Nix in the first quarter.

Christian Gonzalez, who transferred from Colorado before this season, had two interceptions against his former team.

The first three touchdowns of the game involved a backup offensive lineman, Nix catching a pass and a star linebacker scoring a rushing touchdown. Oregon scored first on a 4-yard touchdown pass from Nix to Josh Conerly Jr., who’d lined up as an extra offensive lineman and eligible receiver.

After the Ducks stopped the Buffaloes on fourth down, Nix caught a soft toss from Irving and jogged into the end zone for a 14-0 Oregon lead with 2:25 left in the opening quarter.

Five plays into the second quarter, Noah Sewell, one of Oregon’s top defensive players, got a carry from the 1-yard line and powered into the end zone for a 21-0 lead.

Colorado (1-8, 1-5) answered with J.T. Shrout’s deep throw to wide receiver Jordyn Tyson, who caught the ball on the run, gained his balance and ran for an 81-yard touchdown. But the Buffaloes wouldn’t get any closer.

Shrout had 247 passing yards and Tyson 137 receiving yards for Colorado. Nix (two) and Noah Whittington (one) ran for the three Oregon touchdowns in the second half.