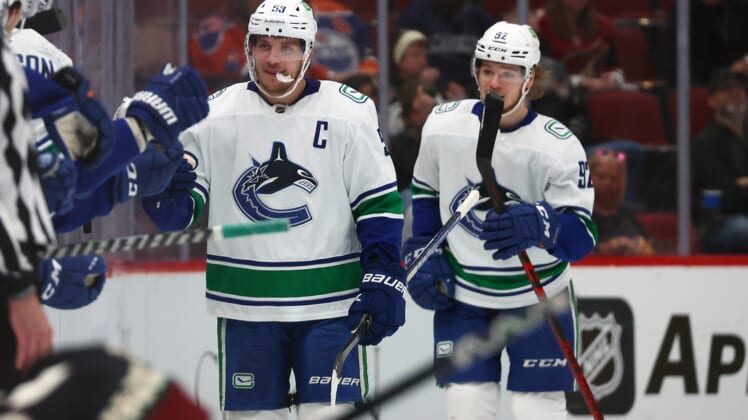 Vancouver’s Bo Horvat scored twice in 38 seconds and reached the 30-goal plateau for the first time on a three-point night, helping the Canucks to a 5-1 win over the Arizona Coyotes in Glendale, Arizona, on Thursday.

With its second road win in two nights, Vancouver (34-28-10, 78 points) was able to gain one point on No. 2 wild-card Dallas, leaving it six points behind the Stars, who lost on their home ice to the Toronto Maple Leafs.

Alex Chiasson scored both of Vancouver’s power-play goals and had an assist. Elias Pettersson’s goal and two helpers left him with 14 points (seven goals, seven assists) in his past 10 matches.

Defenseman Quinn Hughes was out of the lineup for his second consecutive contest due to a non-COVID-related illness.

In his first NHL appearance since 2018, goalie Harri Sateri made his Coyotes debut with 27 saves on 32 shots. Sateri, 32, went 5-0-0 in Finland’s gold medal-winning performance in February’s Olympics.

Special teams played a role right away, with Arizona’s poor 30th ranking on both the power play and penalty kill at the forefront.

During the game’s first man advantage 3:12 in, Chiasson was alone in front of Sateri, and Pettersson — fresh off a four-point Wednesday against Vegas — put the puck on Chiasson’s stick for his eighth marker.

The Coyotes had a lone power play when Chiasson went off for roughing Barrett Hayton, but the home side could muster just one ineffective shot on Halak over the two minutes.

In the second period, Horvat scored twice in the first 90 seconds — sweeping in a wraparound shot past Sateri, then notching his 30th goal for the first time in his career off a backhanded pass from Podholzin on a three-on-two rush.

Schmaltz finally put his club on the board when he slipped a backhander between Halak’s pads almost six minutes later — his 22nd tally, but Pettersson scored his 25th on a give-and-go with Chiasson at 11:12.

Chiasson’s second man-advantage goal rounded out the scoring in the third period as Vancouver maintained its slim playoff hopes.