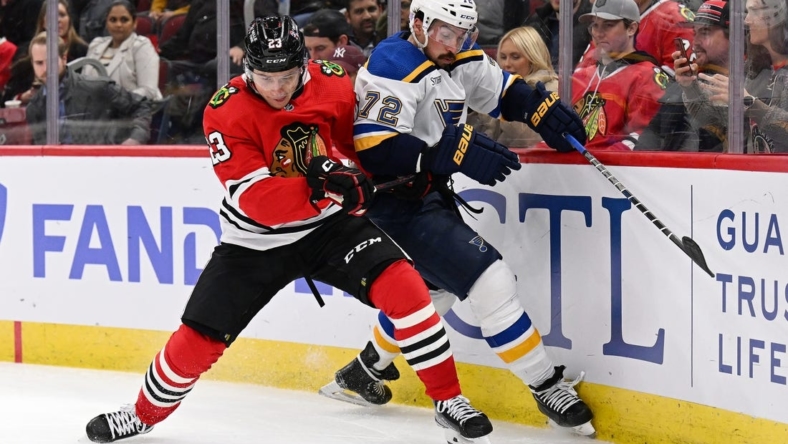 Ryan O’Reilly, Ivan Barbashev and Jordan Kyrou each had a goal and assist as the St. Louis Blues defeated the host Chicago Blackhawks 5-2 on Wednesday night to extend their winning streak to four games.

Jordan Binnington stopped 25 of 27 shots for the Blues, and has started each game during the surge following the team’s eight-game skid.

St. Louis continued a recent run of dominance against Chicago, improving to 8-0-2 in the clubs’ past 10 meetings, including a 4-0-2 run at United Center.

Andreas Athanasiou scored twice for the Blackhawks, notching his first multi-goal game of the season. The rest of his teammates couldn’t complement the effort, however, as the Blackhawks were held to three goals or fewer for the ninth straight game.

The Blues opened the scoring at 14:09 of the first period, when Calle Rosen sent a shot from the high slot that deflected off Chicago defenseman Alec Regula and into the net after first appearing to be off the mark.

Kyrou made it 2-0 at 5:12 of the second, gathering a pass from Nick Leddy before deking his way in front of the net and beating Chicago goaltender Arvid Soderblom with a wrist shot for his third goal in the past four games.

That set a wild period into motion. The Blues and Blackhawks combined for five goals over a span of 6:25 in the second, a flurry that started and finished with St. Louis holding a two-goal advantage. O’Reilly had a short-handed goal, but Athanasiou responded with a tally on the power play 1:27 later.

Soderblom made 30 saves for the Blackhawks, including two he faced over two separate Blues power plays. Chicago was 1-for-3 with the man advantage compared to 0-for-2 for St. Louis.

Defenseman Tyler Tucker made his NHL debut for the Blues, entering the lineup for an injured Colton Parayko, who skated briefly in pregame warmups before leaving the ice.