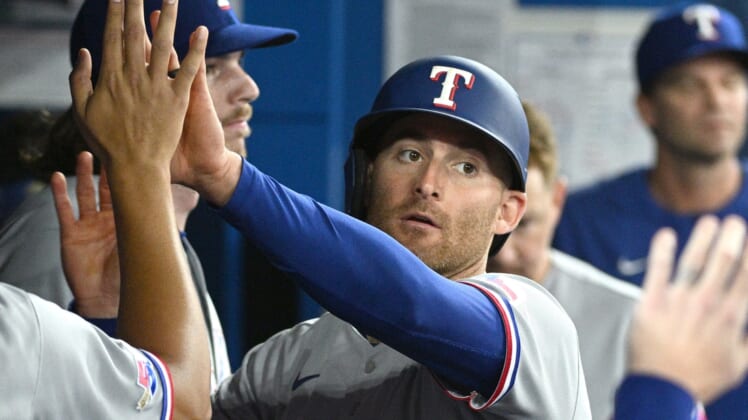 Pinch hitter Santiago Espinal drove in the go-ahead run with a double in the sixth inning and the Toronto Blue Jays defeated the visiting Texas Rangers 4-3 on Saturday afternoon.

Bo Bichette hit a solo homer for the Blue Jays, who have won the first two games of the three-game season-opening series.

Jordan Romano pitched a perfect ninth to earn his second save of the season. He converted his 25th consecutive save opportunity dating to last season to match Tom Henke’s club record set in 1991.

Toronto scored twice in the first inning. George Springer was given credit for a single when third baseman Andy Ibanez bobbled his leadoff grounder. Bo Bichette singled to left and Vladimir Guerrero Jr. blooped an RBI single to right. Lourdes Gurriel Jr. had an RBI fielder’s choice grounder to third to make it 2-0.

Texas took a 3-2 lead in the third. Jonah Heim singled to right and reached second when his hit was bobbled by Teoscar Hernandez. He took third on Brad Miller’s single and scored on Marcus Semien’s double. Miller scored on Corey Seager’s groundout to third and Nathaniel Lowe hit an RBI single.

Bichette led off the bottom of the fifth with a home run to left center that tied the game.

Toronto’s Trevor Richards (1-0) pitched around a single and a walk in the sixth.

Espinal, batting for Cavan Biggio, hit an RBI double in the bottom of the sixth against Brett Martin (0-1), who replaced Dunning. It scored Raimel Tapia, whose grounder to the pitcher had forced Alejandro Kirk at second. Kirk had hit a one-out single.

Yimi Garcia pitched a perfect top of the seventh. Texas’ Spencer Patton, who got the final out of the sixth, survived a single and a hit batter in the bottom of the seventh.

Tim Mayza pitched a perfect top of the eighth for Toronto.