Blue Jays aim to crank up heat on slumping Yankees 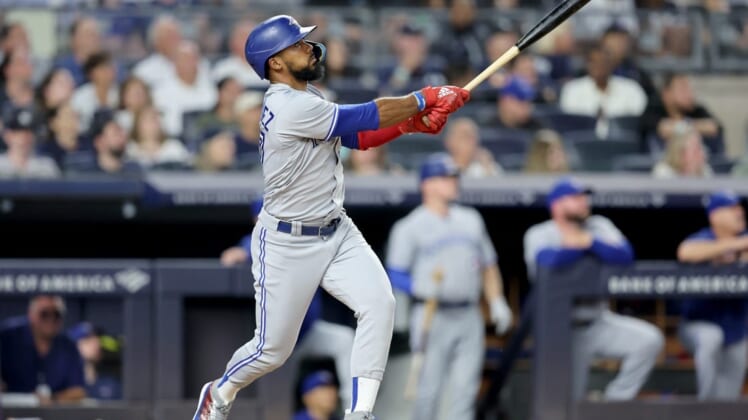 Shortly after watching the Yankees endure another loss on Friday that dropped what once was a 15 1/2-game lead in the American League East down to eight games, New York manager Aaron Boone was fired up.

“I don’t give a (expletive) about the lead,” Boone said after his team mustered only four hits in a 4-0 defeat to the Toronto Blue Jays that followed a 9-2 setback in the series opener on Thursday. “We gotta play better.”

The Yankees hope the improvement starts Saturday when they host the Blue Jays in the third game of a four-game set.

New York has failed to gain any traction after Josh Donaldson’s 10th-inning grand slam gave them an 8-7 victory over the Tampa Bay Rays on Wednesday. After striking out 13 times and going 1-for-10 with runners in scoring position on Thursday, the Yankees struck out eight times, produced four singles and had just two at-bats with runners in scoring position on Friday.

“We’ve hit a rough patch, and we gotta dig ourselves out, and we can sit here and keep answering questions and talk about it,” Boone said. “We gotta go do it.”

Toronto is within eight games of the division lead for the first time since June 13. After losing eight of 10, the Blue Jays have outscored their opponents 19-3 over the past three games.

On Friday, Toronto received seven stellar innings from Kevin Gausman and got a two-run homer from Teoscar Hernandez. The Blue Jays earned the win without leadoff man George Springer, who fouled a ball off his knee on Thursday, when he went 5-for-5.

“Now we’ve kind of put ourselves in a good spot, but we’re going to make the postseason or not based on how we play, and I think we all know that,” Gausman said. “We know it’s gonna be a challenge where I think that urgency was kind of lacking at certain points during the season, but where we’re at now, I think we all know 50-something games left, we gotta strap it on. Now we gotta go.”

New York will attempt to reverse its slide behind Gerrit Cole (9-5, 3.30 ERA) on Saturday.

The veteran right-hander is 0-3 with a 4.35 ERA in five starts since the All-Star break after pitching to a 3.02 ERA in his first 19 outings.

Cole is 5-1 with a 3.47 ERA in 10 career starts against Toronto. His only outing against the Blue Jays this year came on April 13 in New York, when he allowed two of Vladimir Guerrero Jr.’s three homers and three runs in 5 2/3 innings.

Toronto’s Mitch White (1-3, 3.72) is set to make his third start since being acquired from the Los Angeles Dodgers at the trade deadline. So far, White has allowed four runs and nine hits in 9 1/3 innings for the Blue Jays, against the Minnesota Twins and Cleveland Guardians.

The right-hander will face the Yankees for the first time in his career.