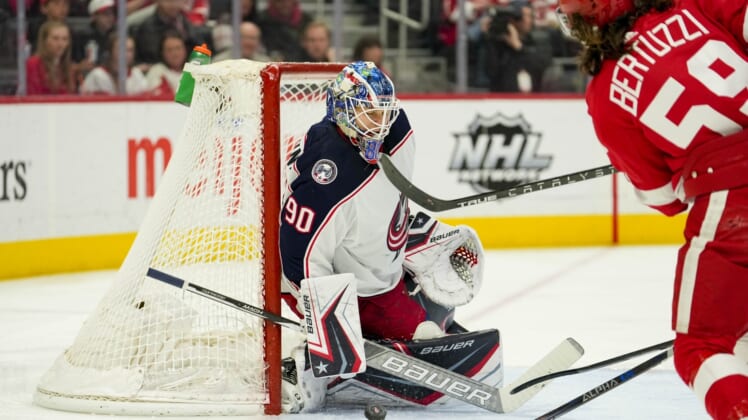 Jack Roslovic had three goals and an assist, and scored the game-winning goal in overtime, to lead the Columbus Blue Jackets to a 5-4 road win over the Detroit Red Wings on Saturday.

Columbus opened the scoring with 6:46 remaining in the first period when Roslovic stole a clearing attempt from Detroit’s Dylan Larkin near the Red Wings blue line, then turned and fired a wrist shot that went over the glove of Detroit goalie Alex Nedeljkovic and into the net to make it 1-0 Blue Jackets.

The Red Wings tied the game at 1-1 with 6:19 remaining in the second period when Vrana took the puck just inside the Detroit blue line, used his speed to streak down the ice and past the Columbus defense, and beat Elvis Merzlikins in between the legs.

The Red Wings then took a 2-1 lead with 2:39 on a goal by Sam Gagner, who took a cross-ice pass from Marc Staal and buried the chance into a half-open net.

The lead didn’t last long, as Columbus tied the game 40 seconds later when Cole Sillinger got open in front of the Detroit goal, took a pass from Zach Werenski and fired the puck past Nedeljkovic to tie the game at 2-2.

With 15:56 left in the game, Roslovic scored his second of the game, giving Columbus a 3-2 lead when he put home a rebound off of a shot by Patrik Laine.

Columbus then took a 4-2 lead with 7:26 left on a goal by Justin Danforth, who redirected a pass from Roslovic into the goal.

Detroit cut the Columbus lead to 4-3 with 4:25 after Dylan Larkin fired a shot from the slot that went past Merzlikins.

The Red Wings then tied the game at 4-4 with 3:27 left when Vrana fired a shot off of a faceoff that trickled past Merzlikins.