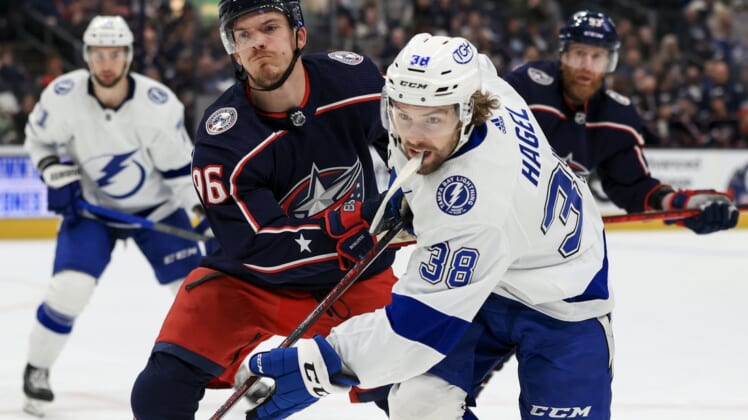 Oliver Bjorkstrand had a goal with an assist and Elvis Merzlikins made 25 saves as the Columbus Blue Jackets cooled off the visiting Tampa Bay Lightning with a 5-2 victory on Thursday night.

Jack Roslovic recorded his 22nd goal, while Jakub Voracek and Cole Sillinger also scored and Andrew Peeke added an empty-netter for the Blue Jackets (37-37-7, 81 points), who have won two of three following an 0-3-1 rut.

Facing a Tampa Bay squad that totaled 26 goals to win its previous four contests and is trying to maintain third place in the Atlantic Division, Columbus killed five of the visitors’ seven power-play chances and got a solid effort from Merzlikins in its home finale.

Bjorkstrand has a career-high 27 goals. He posted three with three assists in three games after going 11 straight without a point.

Nikita Kucherov extended his goal streak to a career-high eight games and Corey Perry scored late, but the Lightning (50-23-8, 108 points) were outhustled most of the night by a Columbus group playing without nine injured players. Brian Elliott stopped 30 shots for Tampa Bay, which had won five straight in this series.

Tampa Bay looked like it opened the scoring just before the midway point of the first period, but Pat Maroon’s goal was overturned via video review for goaltender interference. Instead, Columbus tallied first through Voracek’s one-timer with 3:57 to play in the first.

Kucherov, however, responded via a one-timer of his own with 9:45 left in the second period to extend the Lightning’s power-play goal streak to seven games. Just 32 seconds later, Columbus regained the lead with Sillinger alone in front to bounce the puck off Elliott and in.

Just 15 seconds into the third period, and on a power play of their own, the Blue Jackets padded the advantage when Roslovic rang the post for his 10th goal over a nine-game stretch. Bjorkstrand continued his late-season tear on a drive with 10:55 left in regulation.