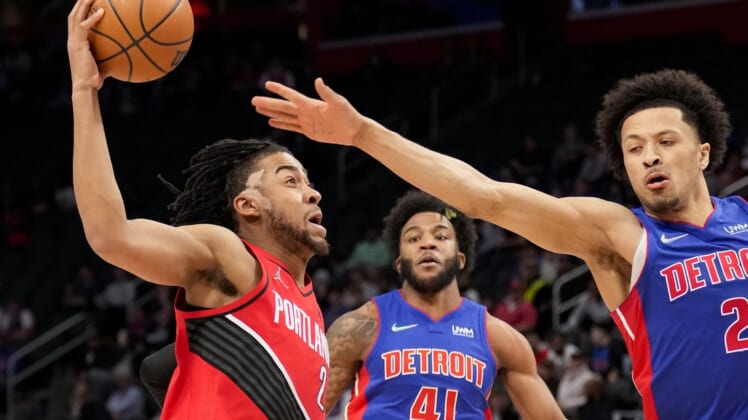 Brandon Williams had 23 points and the visiting Portland Trail Blazers snapped a four-game losing streak by holding off the Detroit Pistons 119-115 on Monday.

Both lottery-bound teams sat out prominent players. The Pistons were missing two starters, leading scorer Jeremi Grant and point guard Cory Joseph. Among the Blazers who missed the game was Josh Hart (knee soreness), who averaged 28.6 points over the previous five games.

McLemore had 16 points by halftime as the Trail Blazers established a 67-52 lead. Williams tossed in 11 as the Blazers shot 53.5 percent while holding the Pistons to 34.8 percent shooting. Cunningham was Detroit’s main offensive source, scoring 18 points.

A 10-0 Blazers spurt increased their lead to 23, 79-56, three minutes into the second half. Elleby had a 3-pointer and a three-point play during that span.

Detroit then went on a 17-4 run, including eight points from Bey, to cut its deficit to 10. Portland pushed the advantage to 17 but the Pistons finished the quarter on an 11-2 run to make it 96-88 heading into the fourth.

Detroit continued to chip away and finally tied it at 101-apiece when Hayes made a steal and dunked five minutes into the quarter. The Pistons took a 106-105 lead with five minutes remaining on a Luka Garza free throw.

Detroit was unable to hold the advantage. A Williams steal and Winslow layup gave Portland a 112-108 edge. A Bagley alley-oop dunk cut it to 114-112 with a minute to go. Williams drove into the lane and scored for another four-point Blazers lead.

The Pistons never got closer than four points in the final minute.