Bill Belichick not interested in talking about Tom Brady’s future 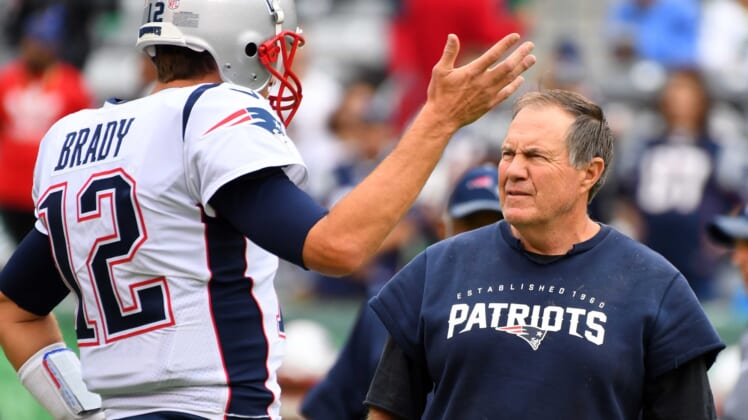 Despite some recent struggles, 41-year-old New England Patriots quarterback Tom Brady indicated earlier this week that he plans to return for the 2019 season and beyond.

“I absolutely believe I will (come back). I know I’ve talked about it for a long time,” Brady said. “I have goals to play not only next year, but beyond that. I’m going to try to do as best I possibly can.”

The five-time Super Bowl champ has his Patriots in the running for a first-round bye heading into their season finale against the New York Jets this coming Sunday. Though, Brady also hasn’t been himself in recent weeks. The veteran has combined for just six touchdowns compared to four interceptions in the past four games.

After being asked about his quarterback’s future, Patriots head coach Bill Belichick was not interested in talking about Brady. In a very Belichickian manner, he brushed off talk about Brady returning for the 2019 campaign.

Having traded Jimmy Garoppolo a year ago this past Halloween, New England doesn’t have a plan of succession at quarterback. It’s Brady’s team. And it will continue to be Brady’s team.

In no way does that mean Belichick and Co. won’t go out there and look for a young quarterback at some point during the 2019 NFL Draft.

That could lead to the team looking to the future should New England miss out on a third consecutive Super Bowl appearance.