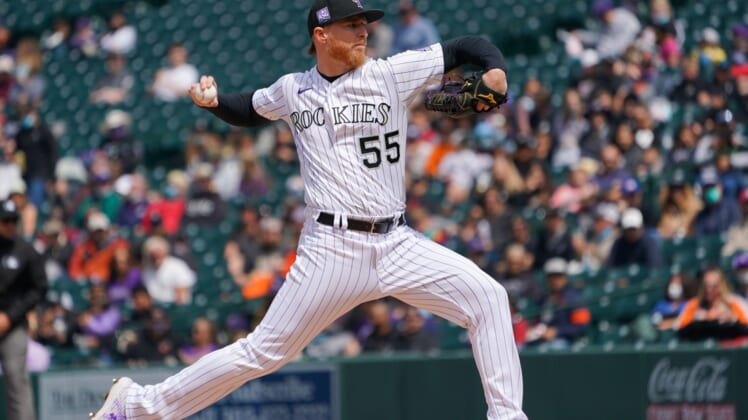 The Colorado Rockies scored all six runs in the fourth but had to hold on to beat the San Francisco Giants 6-5 in Denver on Wednesday afternoon.

Colorado took two out of three against the Giants in the series.

The matinee was going great for San Francisco starter Logan Webb (1-3) up until the fourth. Up 2-0, Webb had not surrendered a hit until Garrett Hampson singled with one out. Things went downhill from there.

Colorado loaded the bases on two hits and a walk, and Charlie Blackmon tied the score with a single. Webb then walked the bases loaded, struck out Dom Nunez and walked Alan Trejo for the go-ahead run.

San Francisco brought in Matt Wisler who gave up an RBI single to Colorado starter Jon Gray and a two-run single to Raimel Tapia.

The Giants took the initial lead when Evan Longoria led off the second inning with a single and came home on a home run by Brandon Crawford.

San Francisco made it a two-run game in the seventh on a home run from Darin Ruf following Steven Duggar’s triple.

In the ninth, the Giants put runners on with no outs. With two outs, Crawford scored from third when Nunez, the Colorado catcher, skied a throw to second on a steal attempt.

Daniel Bard needed 30 pitches to earn his third save by getting Ruf to ground out to short. Bard walked two and struck out two.

Gray (4-2) gave up two runs in the second but was solid throughout. He went six innings, giving up two runs on four hits with eight strikeouts.

Webb was charged with all six runs the Rockies scored in the fourth. He went 3 2/3 innings, allowing three hits with five strikeouts.

Of Colorado’s six hits, Blackmon had two of them. San Francisco’s Buster Posey went 2-for-3.

Both teams have Thursday off. The Rockies will kick off a three-game series in St. Louis on Friday. San Francisco starts a homestand against San Diego on Friday.