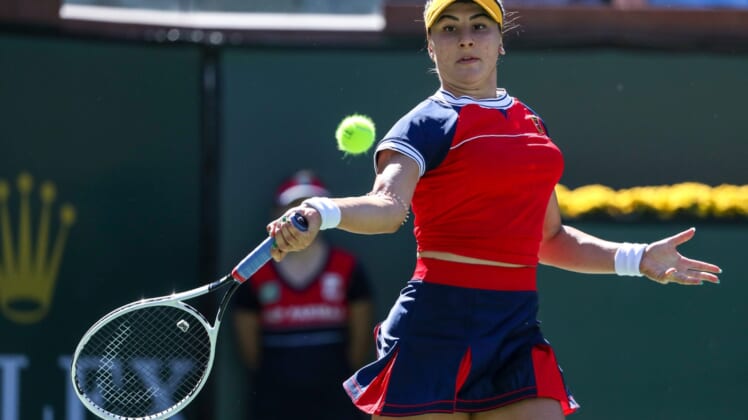 Sunday was a day for upsets at the Mutua Madrid Open, with three of the top seven seeds ousted in second-round play at the WTA 1000 clay-court tournament in Spain.

No. 4 Maria Sakkari of Greece, No. 6 Danielle Collins and No. 7 Garbine Muguruza all were eliminated.

Anhelina Kalinina of Ukraine, seeking her first career title, toppled Muguruza 6-3, 6-0 on the Spaniard’s home soil for the first Top 10 win of her career.

Kalinina controlled the match at the baseline and hit 26 winners compared to eight for her opponent. She also won 73.8 percent of her points on first serve, while Muguruza captured 55.6 percent.

“I didn’t expect the score was going to be like this,” Kalinina said. “I was just very focused, even during the match I was not thinking about the score. In the first set I felt a little bit of pressure — it was very tough with a few balls, but when I closed the set I felt much more confident.

“I’m getting much more matches than in previous years, so I’m getting a lot more experience. The more you play with these top players, the more you feel you are at home.”

Kalinina’s third-round opponent will be Emma Raducanu of Great Britain, the No. 9 seed, who escaped the upset bug with a 6-2, 6-1 win over Ukrainian Marta Kostyuk.

Canadian Bianca Andreescu, the former World No. 4 who is returning from a six-month break, won her first-ever match off hard courts with a quick 6-1, 6-1 victory over Collins. It was her first Top 10 win since she beat Serena Williams in the final of the 2019 U.S. Open.

Collins made an uncharacteristic 33 unforced errors to nine for Andreescu.

“I knew I had to put on a very good performance because she’s been doing very well recently; I did not expect for it to go like that at all,” the Canadian said of Collins. “But I stuck to my game plan and it worked.

Andreescu will face another American in the third round, No. 12 seed Jessica Pegula, who defeated Estonia’s Kaia Kanepi 6-3, 6-3 on Sunday.

In other action, Daria Kasatkina of Russia came from behind to defeat Sakkari 3-6, 6-3, 6-1 and set up a third-round match with Spain’s Sara Sorribes Tormo, who knocked out Japan’s Naomi Osaka 6-3, 6-1.

No. 16 seed Elena Rybakina of Kazakhstan moved on when Czech Katerina Siniakova retired down a set and a game. Rybakina next will meet Jil Teichmann of Switzerland, who upset Canadian Leylah Fernandez, the No. 17 seed, 6-4, 6-4.