The Miami Dolphins signed cornerback Xavien Howard to an extension in May 2019, but after recording 10 interceptions in 2020, the 27-year-old is already asking for a raise.

An extensive report by the Miami Herald from Tuesday confirmed that Howard is holding out of mandatory Dolphins minicamp in the hopes of getting more money. Head coach Brian Flores spoke about the situation:

“Talking about a potential renegotiation after one year. […] it’s something that hasn’t been done before. Not saying we’re drawing a line in the sand. We obviously had a lot of talks and will continue to have those and keep those internal. We love X. He’s very productive. He’s a team player. He’s an important player on this team. Unique situation. We want to keep him here.”

It’s likely that the three-year, $39 million extension linebacker Jerome Baker just signed played a part in Howard taking even more of a hardline stance for a renegotiated multi-year deal. If the situation lingers for too long, though, there’s always a chance a big trade could be in the offing.

Because of the fact that the Dolphins have great salary cap flexibility, and an excellent defensive coach in Flores, they have a number of ways to approach this Howard dilemma. Here are the three best strategies for general manager Chris Grier to deploy.

Per the Herald’s report, part of the reason Howard wants more money is the fact that Byron Jones is actually the team’s highest-paid cornerback. Jones didn’t have near the ball production Howard had last season (two interceptions), yet is the Fins’ highest 2021 cap hit at $16.1 million.

It’s a little bit unfortunate that this particular detail surfaced in the report, as it could create friction in the locker room between Howard and Jones. Miami may be in a position where it has to make a choice between the two.

In all honesty, the Dolphins can afford to move on from Jones, who’s not flashed the upside Howard has. Grier hasn’t been shy about moving on from big initial commitments to players if things aren’t working out. Look no further than Miami’s decision to cut Kyle Van Noy one year after giving him a four-year, $51 million deal.

Jones inked an even pricier five-year, $82 million payday during the 2020 offseason. However, if he’s traded now, he’d only cost $2.1 million in dead money and would save the Dolphins $14 million in cap space for the year.

Again, Flores’ coaching acumen and Howard’s phenomenal individual play gives Miami the option to move Jones for either a high draft pick, or a proven player at a roster spot of greater need, such as on the offensive line or front seven.

It’s unclear what the big rush is for Howard to renegotiate a huge contract. The Dolphins have already shown that they want to keep him in Miami for the long haul, and as it stands, his five-year, $75 million-plus deal is quite strong.

You can’t blame players for trying to get everything possible while they’re still in their prime, or when they have even an ounce of leverage, but Howard’s tactics are definitely causing tension where there doesn’t need to be any.

Howard has a point: He performed better than Jones in 2020, and based on that alone, should be the highest-paid corner. On the other hand, Howard has shown wild inconsistency. His best years were last season and 2018, but between those, it’s been a lot of underwhelming play.

Although Jones did have a down 2020 campaign, he was stellar in the two years before, ranking 11th and 14th respectively in Pro Football Focus’ grades.

Howard runs circles around Jones in terms of ball skills and interceptions. He showed better temperance of his risk-reward style than ever before this past season.

With all that as background, Jones seems like the more consistent and reliable pro who fits into the culture Flores is trying to build in Miami in a more seamless way. For better or worse, there are merits to the Dolphins playing a little bit of hardball with Howard, and essentially saying, “We just paid you, is that not enough?”

So the flip side of that Jones trade scenario is, instead, sticking with him and not letting Howard’s semi-ridiculous tactic of negotiating for a new deal create potential problems in the organization. After all, at the time of Howard’s 2019 extension, he was the highest-paid corner in the NFL.

To refer back to one other element of the Herald‘s report, when Miami was toying with the idea of trading Howard last offseason, the Arizona Cardinals were an interested suitor. “Nothing came close” as far as a deal between the Cardinals and Dolphins, but the two sides have had exploratory talks about Howard before. 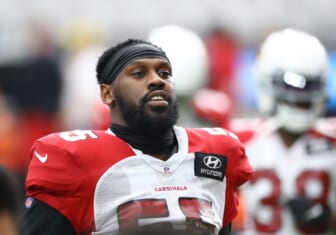 Remember that Arizona lost Patrick Peterson to free agency and could use a lockdown corner on defense as it tries to ascend in a wildly competitive NFC West. Howard fits that bill, and seems to be a specific player the Cardinals have coveted in the past.

Pass-rusher Chandler Jones seems keen on getting out of the desert, and spent many years with Flores to begin his NFL career on the New England Patriots. The Dolphins need a difference-maker on the edge, and Jones fits the bill.

Jones for Howard seems like a one-for-one swap match made in heaven. We’ll see if that comes to pass.