The Miami Dolphins took care of one of their offseason priorities on Sunday, signing star linebacker Jerome Baker to a three-year, $39 million extension.

Baker, 24, has been brilliant since the Dolphins selected him in the third round of the 2018 NFL Draft from Ohio State. Last season alone, the linebacker recorded 112 tackles, 11 quarterback hits, seven tackles for loss and two forced fumbles. He’s going to be a catalyst for head coach Brian Flores’ defense over the next several years.

With that said, Miami still has some holes to fill on both sides of the ball ahead of the start of training camp late next month. The team is coming off a surprising 10-6 season and is in the hunt to earn its first playoff appearance since 2016. Here’s a look at three moves the Miami Dolphins should still make this offseason.

Speaking of Baker, he was second on the Dolphins in sacks a season ago with seven. That’s not necessarily a great thing given that he plays inside linebacker. Miami did attempt to upgrade its edge pass rush position by selecting Miami Hurricanes product Jaelan Phillips in the first round of the 2021 NFL Draft. However, relying on a rookie to perform at a high level just can’t be in the cards.

That’s where Jones comes into play. It’s been noted on a near never-ending loop recently that the All-Pro is on the trade block. He’s remained away from Arizona’s offseason activities while being in search of a new contract. The pending free agent is also one season removed from recording a whopping 19 sacks. While it would take some work from general manager Chris Grier to fit Jones’ $15.5 million cap hit under the cap, he makes too much sense for Miami right now.

Miami is going to rely on a combination of Myles Gaskin and Malcolm Brown at running back after surprisingly avoiding this position early in the 2021 NFL Draft. While Gaskin in a great receiving threat (41 catches on 47 targets last season), he averaged a mere 4.1 yards per rush and put up less than 600 yards on the ground. Brown? He’s never recorded more than 419 yards on the ground in any of his six NFL seasons.

Sure Peterson is on his last legs. He’s not going to be the home-run threat we saw during his heyday with the Minnesota Vikings some nine years ago. Even then, he’s still a productive back at the heightened age of 36. Over the course of the past three seasons, Peterson is averaging 1,145 total yards and seven touchdowns at a clip of 4.6 yards per touch. He’d immediately become the Dolphins’ RB1 on a short-term and team-friendly contract.

Rumors out of South Beach continue to persist that Howard could be on the trade block. Despite leading the NFL with 10 interceptions a season ago, he’s a luxury the Fins simply can’t afford. The veteran corner is slated to count $13.5 million against the cap in 2021. By trading Howard Miami would save $14 million. That’s not a typo. 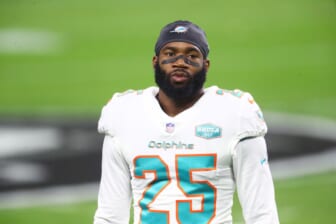 Miami selected Auburn’s Noah Igbinoghene in the first round of the 2021 NFL Draft. Flores and Co. seem to think he’s ready to start opposite Byron Jones. Meanwhile, rookie second-round pick Jevon Holland could play cornerback if need be. By moving off Howard in a trade the Miami Dolphins wouldn’t only acquire a draft pit, they would free up cap room to make a move for someone like the aforementioned Chandler Jones.