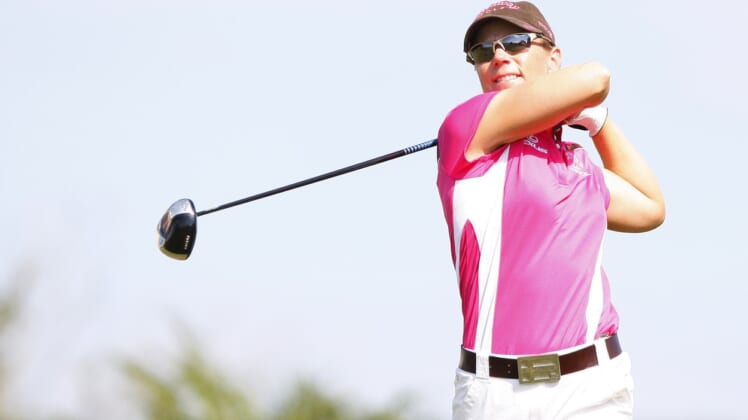 April 18, 2008; Reunion, FL, USA; Annika Sorenstam tees off on the seventh hole during the second round of the Ginn Open at Reunion Resort. Mandatory Credit: Kim Klement-USA TODAY Sports

When assessing who the best female golfers of all-time are, it’s important to factor in the era in which the LPGA Tour’s biggest legends played and won major championships in their Hall of Fame careers.

Some quality players who helped shape the history of the women’s game were left off this list, but here’s our ranking of the 14 best female golfers ever.

Not dissimilar in some ways to Phil Mickelson from the men’s game, Nancy Lopez is easily a Hall of Famer and prolific LPGA Tour winner. However, in addition to her three Women’s PGA Championship triumphs, Lopez’s legacy is shaped in part by a lot of close calls at the majors, as she logged seven runner-up finishes. Lopez still ranks seventh all-time in LPGA Tour wins with 48.

An obvious career highlight for Betsy King was the successful defense of her U.S. Women’s Open title in 1990. She also picked up one of her three wins at the ANA Inspiration that year and won the Women’s PGA during the 1992 campaign. Her 34 wins and six majors give King one of the best women’s golf resumes ever.

With just one additional victory over King to her name and the same number of majors, Patty Sheehan gets the slight nod ahead of King among the best female golfers. Sheehan won back-to-back PGA Championships in 1983 and 1984 and won the tournament again in 1993. Sheehan would’ve won an additional major, but the Women’s British Open wasn’t considered one until 2001.

Although she won the U.S. Open twice, Sheehan did squander an 11-shot lead on the weekend in 1990, as King went on to win.

Eight-time major champion Betsy Rawls ranks sixth on the all-time majors and LPGA Tour victories lists. The era in which she played lent to lesser competition, not to mention several different major championships. That’s why she’s just outside the top 10 despite her obvious impact on the game and prolific winning.

The trademark slow, wind-up backswing Inbee Park deploys has allowed her to achieve incredible success. She’s the only full-time, active player on this list. For good reason. At age 33, Park has already won seven majors. Three of them happened during her magical 2013 season.

Park hasn’t been a major winner since 2015, yet she’s still knocking on the door for more. Combine a little projection with her 31 professional wins, and Park deserves to be in the top-10 conversation among the best female golfers ever.

A three-time du Maurier Classic champion and major winner of every other event of that variety during her era, Pat Bradley’s best season was in 1986. She won three of the four majors that year, and finished in the top five at the U.S. Women’s Open. For that feat, and her 31 LPGA Tour wins, Bradley deserves a spot inside the top 10.

It’s really difficult to figure out where to place Juli Inkster. Some would argue she’s a lot higher than this because of her longevity, but there are more accomplished champions ahead of her. Anyway, Inkster was a Solheim Cup stalwart who enjoyed remarkable consistency and worked to compete at the highest level beyond any reasonable expectations, both as a player and as a captain.

Inkster won the du Maurier Classic, then a major in 1984, along with her first ANA Inspiration title, which she won again in 1989. She then won the PGA and U.S. Open twice apiece around the turn of the century. Winning multiple majors in three different decades is pretty good, no?

Another modern master on the links, Karrie Webb is the only “Super Grand Slam” winner in LPGA history. That’s because she managed to win all five events that were considered majors during her playing days.

Webb is from Australia, and has 13 wins on her native ALPG Tour in addition to her 41 LPGA victories. She’s still not officially retired, but you won’t see Webb teeing it up often these days. It’s fine. Her resume speaks for itself.

A co-founder of the LPGA Tour, Louise Suggs ranks fourth on the all-time wins list (61) and third in major championships (11). Again, because this list skews a little more toward more modern players, Suggs takes a bit of a hit here. Without her influence, though, women’s golf wouldn’t be where it is today.

An incredible multi-sport athlete who won two gold medals and a silver at the 1932 Olympics in track and field, Babe Didrikson Zaharias’ golf career was brief but incredible. She died at age 45 in 1956, had only turned pro in golf in 1947. Despite that late start, Zaharias helped found the LPGA, and has 10 majors and 41 tour wins to her name.

The winningest golfer in LPGA Tour history, Kathy Whitworth has a whopping 88 victories to her name. Whitworth’s major record leaves something to be desired, though. She only has six, which pales in comparison to some of her fellow elite peers. Still, she was the first to earn $1 million in earnings on the LPGA Tour, and is definitely worthy of a top-five spot on this list of best female golfers.

The criteria and weight given to majors in women’s golf is tricky because the tournaments that count as such have changed often throughout LPGA Tour history. Patty Berg does own the all-time mark with 15 major wins, however, so by any measure, she’s in the GOAT conversation.

Furthermore, Berg overcame a devastating car accident, volunteered in the U.S. Marines, was a speed skater, and still managed 60 LPGA Tour wins. She won the first-ever U.S. Women’s Open in 1946, and was a seven-time champion at the Western Open and Titleholders Championship — both majors at the time.

Many would argue Mickey Wright as the best female golfer ever, but you’ll see who tops our list in short order. Wright had 82 wins on the LPGA Tour and 13 major titles, so it’s no wonder she’s held in such high regard. Men’s golf legend Ben Hogan said Wright had the best swing he’d ever witnessed.

She’s the GOAT. Annika Sorenstam could’ve played even longer, but retired in 2008 with 72 LPGA wins, and 17 Ladies European Tour wins, ranking third and fifth all-time respectively. Sorenstam won 10 majors, was named Player of the Year eight times and is the only female golfer to shoot a score of 59 in competition.

Sorenstam is active as an ambassador for the women’s game as she participated in the 2021 American Century Golf Tournament, consisting of celebrities and athletes.