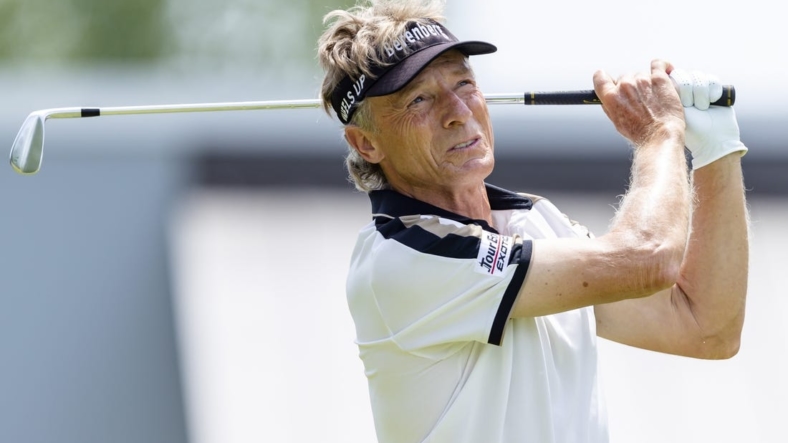 Bernhard Langer shot his age with a 6-under-par 65 and joined Ireland’s Padraig Harrington as co-leaders of the Ascension Charity Classic after Friday’s first round in St. Louis.

Langer holed out for an eagle on the par-4 first hole to kickstart his round at Norwood Hills Country Club. The German stalwart added six birdies and two bogeys the rest of the way.

The pair own a one-shot lead over Ernie Els of South Africa, Steven Alker of New Zealand, Mike Weir of Canada, Jose Maria Olazabal of Spain and Steve Flesch, who all opened with 5-under 66s.

Langer, who turned 65 on Aug. 27, shot his age once already this year with a 64 during the Chubb Classic in February. That tournament also marked his 43rd win on the PGA Tour Champions, two shy of tying Hale Irwin’s record.

On the other end of the spectrum is Harrington, who is finishing up his first full season on the tour after turning 50 in August 2021. He notched his first win at the U.S. Senior Open in June and prevailed again last month at the Dick’s Sporting Goods Open.

“Traditionally, my whole career I’ve always been a much better player with my back to the wall,” Harrington said. “What I’m finding here on the Champions Tour is I’ve got to learn how to play, you know, when I’m favored, when I’m up front, when I’m out leading, when I’ve got a lead.”

Harrington made four of his six birdies on the back nine during a bogey-free round.

John Daly made three straight birdies at the 15th through 17th holes to card a bogey-free 67. He is part of a large tie for eighth at 4 under that also includes Steve Stricker. Daly’s only PGA Tour Champions win came in 2017.

Defending champion David Toms is tied for 26th at 2-under 69.