The agent for Philadelphia 76ers star Ben Simmons, Rich Paul from Klutch Sports, met with the team’s brass during the NBA Scouting Combine in Chicago this week.

According to ESPN’s Adrian Wojnarowski, the conversation with Sixers general manager Elton Brand and president Daryl Morey did include talk about a potential trade before the 2021-22 season.

The NBA insider did note that no trade request was made by Ben Simmons or his representatives. Wojnarowski also pointed to the 76ers potentially wanting to see if they can make it work with the three-time All-Star point guard and reigning NBA MVP finalist Joel Embiid. Whether that’s a possibility moving forward remains to be seen.

Philadelphia is coming off a brutal seven-game series loss to the Atlanta Hawks in the Eastern Conference Semifinals. Those seven games saw Simmons attempt all of three shots in the fourth quarter. His lack of aggressiveness is something Embiid discussed immediately after the 76ers’ Game 7 loss to Atlanta.

This was in response to Simmons passing up an easy lay-up late in the close game. It’s the latest example of a perceived rift between the point guard, his organization and some within the locker room. 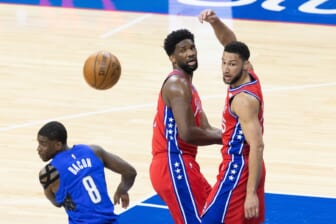 It was noted earlier in the month that Simmons’ trade value has taken a major hit recently.

“I have news for Philly fans, the GMs of the other teams watch the playoffs very very closely,” ESPN’s Zach Lowe noted. “And there are definitely teams that I have talked to in the last 48 hours who were once in on Simmons, who say, at least to me, it could be posturing, “eh, we’re a little less in than we used to be.’”

As Wojnarowski reported, Philadelphia might push back against dealing Simmons if it is not going to get equal market value for the reigning NBA Defensive Player of the Year finalist. Right now, it’s hard to imagine Simmons’ trade value being any lower mere months after Philadelphia offered him up in a package for then-Houston Rockets star James Harden.

Either way, this report is not going to do anything to quiet Ben Simmons trade rumors. His reps will continue to have dialogue with the 76ers’ organization during the summer. Whether that leads to a trade remains to be seen.