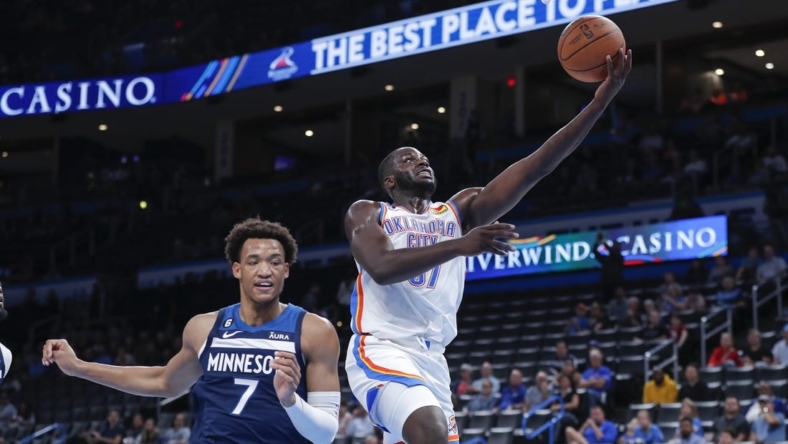 Eugene Omoruyi scored a career-high 22 points as the Oklahoma City Thunder finished with eight players in double figures for the first time in franchise history in a 132-113 win over the visiting Toronto Raptors on Friday.

Tre Mann had 13 points and Jalen Williams had 10 points and 11 assists for Oklahoma City, which led by as many as 32 and shot a season-high 55.9 percent.

Chris Boucher led Toronto with 20 points and a season-high 12 rebounds, while Fred VanVleet and Scottie Barnes had 15 points apiece. The Raptors have lost five of their first seven road games this season.

Oklahoma City led 106-85 after three quarters, and both teams rested their starters for much of the final period. VanVleet exited the game late in the third quarter with a non-COVID illness.

Oklahoma City opened the game by making 11 of its first 16 shots and led 29-24 at the end of the first quarter. Dort led all scorers with 11 points, including three 3-pointers.

The Thunder finished the first half with a season-high 70 points and took a 14-point lead into the break.

Omoruyi scored 10 points in the second quarter for Oklahoma City, which ended the half by shooting 65.1 percent from the field while holding the Raptors to 40.4 percent.

The Thunder maintained their double-digit lead throughout the third quarter and moved ahead 97-75 on Omoruyi’s 3-pointer with 2:59 left in the period.