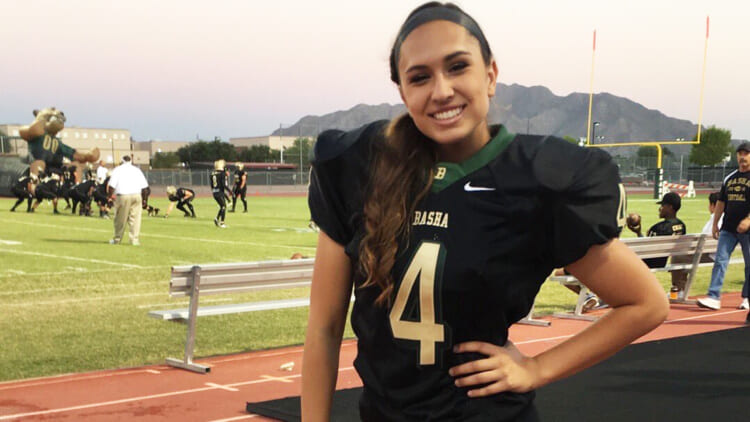 As the first female athlete to receive a scholarship to a Division 1 or Division 2 football program, Becca Longo of Adams State is hoping that her career on the gridiron doesn’t conclude in college.

The 18-year-old kicker has one heck of a leg. That’s been made clear with the comments those around her and the football program have made. For Longo herself, it’s all about continuing with the dream.

“I’ve heard people say that I’m just a publicity stunt, that I don’t deserve this chance,” Longo said, via Bleacher Report. “I don’t let that bother me. I just need to stay true to who I am—and stay true to what I’ve learned and keep improving—and I’ll be just fine. I really believe that. I really do.”

With a range that extends to 50-plus yards, there’s no issues regarding her leg strength. She also connected on 33-of-38 extra-point attempts as a senior in high school last season. All five of the misses were blocks from out on the edge, indicating that Longo herself was not to blame.

Her head coach at Adams State, former NFL quarterback Timm Rosenbach, also sees something special in his most decorated recruit with the program.

“If you can play football and you have determination, I don’t care what your gender is,” Rosenbach said. “And Becca can play, simple as that. She’s got accuracy and she’s got a powerful leg, which will only get stronger. We brought her to Adams State for a reason: to compete for a job and help us win football games.”

This will definitely be an interesting story to follow during the fall. But from the looks of it, Longo has an opportunity to break a gender barrier most figured the football world wasn’t ready to see broken.