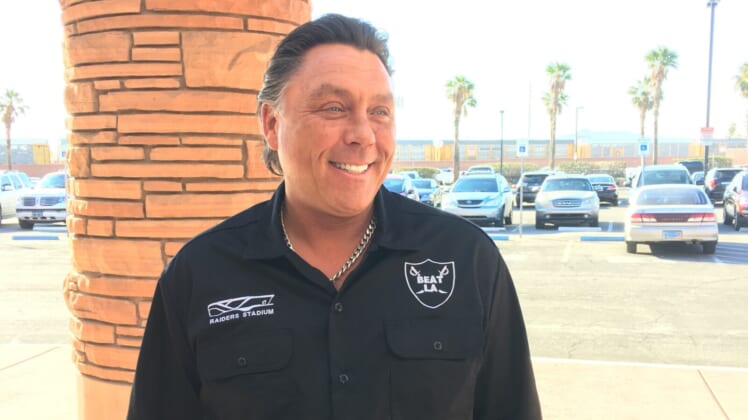 With the Oakland Raiders Las Vegas Stadium plans all but signed, sealed and delivered, the men and women who will build the $1.8 billion facility have set a goal of beating their fellow builders in Los Angeles.

As Laborers Local 872 Business Manager and Las Vegas Stadium Authority Board member Tommy White strolled into the Clark County Government Center today for the document signing for the Raiders’ Las Vegas stadium, his black shirt made quite a statement.

Embroidered on the left chest was a Raiders-esque shield with the text “Beat L.A.” inside.

White is referencing news out of the NFL Owners Meeting in Orlando, Fla., this week, where the Los Angeles stadium project, located in Inglewood, Calif., updated the league on the progress of their construction, financing, and completion date. The $5 billion project is back on schedule after numerous delays. That project, which will include other commercial development, including a hotel, retail and residential, is a larger project than the Las Vegas Stadium.

White believes his laborers and others involved with the project can complete the stadium project by May 2020. The publicly-stated completion date is August 2020.

Despite the difference in size, White says his teams are used to bigger projects and are confident they can beat the Los Angeles project.

“Look, we completed the City Center project in three years and that was about the same size as what they’re doing with the project in LA,” he said. “We’ll get it done early.”

The original – and still reported – completion date of the Las Vegas Stadium is August 2020. Completing the project three months early is an ostentatious goal.

It’s hard to doubt White after he and his members helped significantly in getting the entire stadium project approved, – including the relocation of the Raiders to Nevada. In fact, Raiders owner Mark Davis thanked him publicly in a recent media report.

“Beat L.A. is about the Las Vegas Stadium,” White said. “There’s lots of Raider Nation in L.A., and we can’t wait to welcome them to Las Vegas, where they’ll see what a great new home for the Raiders we’ve built.”

Disclosure: Laborers Local 872 is an advertiser on LVRaidersReport.com and the Las Vegas Raiders Report Podcast.